WEP: In Too Deep 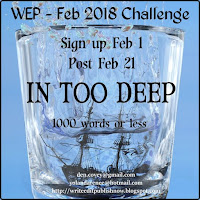 It's time once again for Write . . . Edit . . . Publish!  Thank you to all the wonderful people who make it possible: Denise Covey, Yolanda Renee, Nilanjana Bose, and Olga Godim.

This time around, the theme is In Too Deep.  This is a wonderful theme with countless possibilities, and I deeply enjoyed writing this piece!  (Please excuse my terrible pun.  I couldn't resist.)

I hope you enjoy reading it! 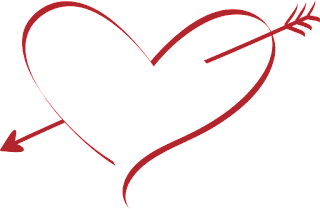 Don’t piss off Cupid.  He’s a vindictive twerp.  We’ve worked together for countless years, so I should know.
Dispense with all your mental images of Cupid.  The little cherub in a diaper you see on Valentine’s Day cards is adorable, but that’s not a practical work uniform.  Instead, he wears tight jeans and a button-down black shirt that he leaves open to show off his washboard abs.  With a quiver of arrows slung over his shoulder and rings of golden hair falling into stunning blue eyes, it’s a wonder half the population doesn’t fall into lust at first sight.  Maybe they do for the brief second they see him before his arrow redirects their amorous interests.
The work is straightforward.  He shoots people, ensuring their budding love.  I have the glamorous job of fetching those arrows and cleaning them so they can be reused.  What?  Did you think the arrow supply was limitless?  Nope.  It would be too cost ineffective not to reuse them.
Cupid likes to brag about the skill it takes to send the arrows sailing painlessly into the correct target.  And yeah, I must admit, it’s not an easy task.  I’ve tried my hand at target practice, so I appreciate the fact that the dude is good.  He’s just insufferable when he’s been going on about how magnificent he is over his third beer of the evening.
Judging by the faces of bar patrons from all over the world, I’m not the only one he’s irritated.  People simply don’t say anything, because his muscles and weaponry make him intimidating.  Which is fortunate, because he has the power to mess up their love lives.  That’s dangerous stuff.
One time we were chilling after work in a London pub, and Cupid started in with his usual antics.  I watched from my seat, nursing my pint of ale and bowl of salted peanuts while he droned on about his prowess.  A guy named Richie, who was three sheets to the wind, told Cupid to stop being such a wanker.  I sputtered, beer pouring out of my nose.  Even as pain flared in my nostrils, my main concern was for the poor fool who’d unwittingly stepped into the biggest metaphorical pile of crap he’d ever stumbled upon.
Cupid’s pale cheeks darkened, fury igniting his eyes.  The sight of a grown man with actual flames licking at his pale irises made Richie stumble back in fear.  Cupid waved his hand at me.  “Come on.  Let’s get out of here,” he barked.
Maybe the guy felt relieved that we left instead of starting a fist fight, but he would have been better off were that the case.  Instead, we went to Richie’s house and, by the time we were done, his boyfriend was head over heels in love with their neighbor.
I should have known better, but that didn’t stop me from screwing up.
On the night of my epic mistake, I’d had a few beers.  We were at a bar in New Jersey, and closing time was fast approaching.  Cupid’s captive audience had dwindled, leaving only me to suffer.  He was in the middle of a top ten list of his best matchmaking strikes when something inside me snapped.
I slammed my mug on the bar.  A wave of beer slopped out over the rim, drenching my hand.  “Can you please shut up for once?” I demanded.  “You’re so damn full of yourself.  Yes, your job is hard, but you’ve been doing it for millennia.  It’s kind of reasonable to expect you’d be good at it by now.  And my job isn’t as easy as you might think.  Sure, you send your arrows in painlessly, but pulling them out painlessly is harder.  Have you seen the way they’re shaped?  I’m good at what I do, too, but you don’t see me prattling on about it to people who don’t care!”
The moment the words were out, I regretted them. Flames erupted in Cupid’s eyes.  I tried to make a beeline from the bar, but he caught up with me on the sidewalk outside.  The arrow he struck me with carried with it a special kind of curse.  “May your love always bring you torment.”  It hurt like hellfire going in.  When I tore it from my body, it left a gaping hole.
I stared at Cupid, arrow in hand while blood gushed from my wound.  I trembled, but it wasn’t with fury at what he’d done.  I looked in his eyes as the fire receded, cooled by icy blue, and my knees went weak with longing.
Realizing what that meant, resentment bubbled in my chest, but it was nowhere near powerful enough to dampen the surging love.
I’m in deep.  I love him, and I loathe that I love him, but the love keeps growing despite my wishes against it.
I look at Cupid’s strong arms, the way his sinewy form tenses as he’s about to release an arrow.  When he lets it fly, I feel once again the anguish of that fateful arrow he struck me with.  The ache settles deep into my bones, consuming me.  I watch those full lips quirk into a cocky grin after the arrow burrows deep into its unwitting target, and I wonder if the touch of those lips to mine would ease the pain or literally set me ablaze.  Not that such a thing would ever happen.  He feels no such need for my touch.  He designed his spell that way.
I am immortal.  So is Cupid.  We are stuck together for eternity.  There is no escape.  I’ve accepted my fate, but I despise it as I’ve come to detest love.
Have you ever fallen in love and felt that painful twinge of realization?  That’s me not caring whether it hurts you as I retrieve the arrow from your tender human flesh.  Why should I concern myself with your fleeting pain when I’m stuck with eternal agony?
Let it burn.