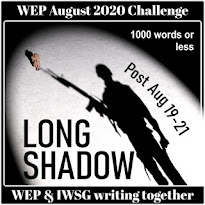 Hello everyone! It's time for the August WEP Challenge! The theme for this one is Long Shadow.
I opted to write something light and simple this time around. 2020 has been hard for us all. I live in Iowa, and last week we had a derecho roll through. For those who don't know, a derecho is a strong thunderstorm with insane winds. This storm experienced winds of well over 100 mph in some places. My family got lucky. We only lost power for a few hours and lost a large branch in one of our trees. This storm absolutely devastated many communities near us, and I personally know many people who had significant property damage. The photos I've seen are nothing short of horrifying.
So, fortunate as I am, I still felt the need for something lighthearted. I think we could all use it.

The sun is going down soon. I look to the west and see the hints of orange and red on the horizon. A bird sings in a tree nearby. It’ll be going to bed soon. I don’t want to go to bed, but I don’t have a choice. I’m only seven.

I smile. I don’t need to go inside yet, though. I have a little more time. Turning my back to the sun, I gaze down at the ground. My shadow stretches out in front of me, taller than two of me stacked on top of each other would be. I push myself onto my tiptoes to make it grow a little more.

With a giggle, I hold my arms out over my head, curling my fingers so they look like menacing claws on the grass. I let out a vicious snarl. “Rawr!” I stomp my feet, hunching slightly so I look like a giant monster in an old movie.

My shadow keeps growing as the sun dips lower. The blades of grass become a forest of trees. An ant skitters past one of my shoes. I wave my clawed hands, and the shadow envelopes the tiny creature.

Run, little one, run! I think as I continue to claw at the air.

The ant disappears under a fallen twig, and I move on.

I’m large. I’m the biggest thing in the world. I pause at a boulder that sits on one corner of a flower bed. It isn’t a boulder today, though. No. It’s pointed top makes it a mountain. I stand beside it and consider the possibilities.

“Rawr!” It takes little effort to climb it, and I balance precariously on the tip. Raising my arms high over my head, I make my shadow spread across as much of the yard as possible. I am gigantic. Cicadas drone in the background as I savor my moment of triumph in the warm summer evening.

My mom’s voice tears me from the moment, and I scramble down from my perch. I can’t see her thanks to the hedge surrounding the patio, but I know she’s waiting there by the door.

“It’s time to come inside!” she calls.

I turn to make my way back to the house, my shadow now invisible behind me. 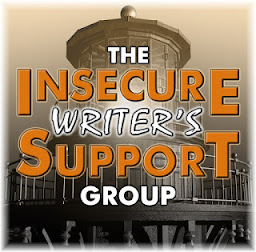 It looks like the first Wednesday of the month snuck up on me this time around. I apologize for running late with my post for The Insecure Writer's Support Group. Our leader Alex J. Cavanaugh has assembled a great group of co-hosts once again: Susan Baury Rouchard, Nancy Gideon, Jennifer Lane, Jennifer Hawes, Chemist Ken, and Chrys Fey.
Be sure to check out the IWSG website for great writerly advice!
The optional question for this month is:
Quote: "Although I have written a short story collection, the form found me and not the other way around. Don't write short stories, novels or poems. Just write your truth and your stories will mold into the shapes they need to be." Have you ever written a piece that became a form, or even a genre, you hadn't planned on writing in? Or do you choose a form/genre in advance?
When I set out to write a story, I have a rough idea of what it's going to be. Sometimes I even have a plot worked out. This in no way guarantees things won't change during the writing process. I have many examples of this, but I'll speak specifically about a project I'm working on right now.
My current WIP takes place on a space station near Saturn, so it's pretty clearly science fiction. The story started out as a YA story. Why? I knew I wanted to deal with characters who were finishing school and trying to figure out how to scrape together a living on a space station, where the economic opportunities are somewhat more limited than they would be on earth. That generates a lot of conflict on its own and is an interesting topic to examine. I wrote about 90K of this story, and while I like a lot of it, I knew something about it wasn't working. I thought about it for a while and decided I needed to age my characters up a bit. They needed a little more experience in this economic reality. In the end, I only aged them up a couple of years. It's enough to officially boot the book out of the YA category, at least. My characters are still young and learning the ropes, but they also have a bit of valuable experience informing their decisions. How will this rewrite ultimately go? I'm not far enough into it to know for certain, but I'm hopeful.
It can feel daunting when your story needs to take a different direction than you initially planned, but that's a part of being a writer. Being open to that change is a crucial part of creating the best stories we can.
Do you stick to the genre/form you set out to write in, or do your tales sometimes transform as you write them?
Posted by L.G. Keltner at 2:25 PM 9 comments: