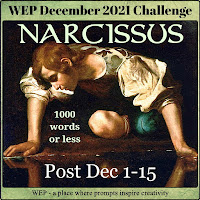 Happy December! It's time for the final Write...Edit...Publish challenge of the year. That means the year of art is coming to an end, and we're closing it out with NARCISSUS.

It sure has been a fun year. A lot of you seemed to enjoy drawing inspiration from famous works of art. It wasn't always an easy task, but we saw some amazing entries! Next year, we're doing a year of music, and I'm confident we'll find plenty of inspiration with that as well. 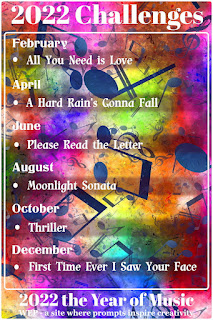 The piece is want to share with you today is related to the novel I'm currently writing. The character here isn't a POV character in the book, but I thought it would be fun to get into his head and write something from his perspective for this month's prompt. I hope you enjoy!

The mirror revealed perfectly styled dark hair and piercing blue eyes. Dorian smiled and appreciated the change in his reflection. He adjusted the collar of his navy blue shirt.

“Go out there and wow them all,” he told himself. “They already look up to you. Now it’s time to make them love you.”

His group of followers started out small, but it had been steadily growing week to week. Word of mouth spread rapidly amongst the desperate. He fed them hope until they were fit to burst. He promised them all a better life, so long as they lived the lifestyle he prescribed to them.

A knock on the door pulled Dorian from his thoughts. He turned to see Trella’s shy smile. The girl was barely twenty, and when he’d first met her, she had been filled to the brim with frustration and resigned to her circumstances. She’d utterly transformed in the last few weeks. A light shone in her eyes that hadn’t been there before.

“Everyone’s getting anxious out there,” she said, her voice soft. She was in awe of him. That awe radiated out of every pore. She would do almost anything he asked. He’d wager his reputation on it. Given a little more time, she would be completely under his control.

What’s in store for you? he wondered. What purpose will you serve?

“I’d better get out there, then,” he said aloud.

Trella’s smile grew. “Good luck out there.” She paused a moment before adding, “Not that you need it.”

Dorian returned the smile. He didn’t need luck. He needed devotion, and if this girl was any indication, he didn’t need to worry at all. “I’ll see you afterwards.”

When he exited the room, he made sure to brush gently against her shoulder as he moved past. A surge of satisfaction welled up within him as Trella’s cheeks reddened in response.

It was only a short stroll down a narrow corridor before he reached the stage entrance. The sounds of the people swelled to greet him as he approached. They couldn’t see him yet, but the anticipation in the air felt electric. He breathed deep and relished in the feeling.

A few steps more took him around the corner and onto the stage.

Instead of increasing in volume, the murmurs of the audience fell away, resulting in dead silence. Each pair of eyes in the room came to bear upon him. Backs straightened. Faces turned up. Every person in the room was on the edge of their seat, waiting eagerly to hear what Dorian had to say.

It would be rude to keep them waiting.

The lights beamed down on Dorian, creating a cone of illumination around his body. He held his arms out and tilted his head slightly upward. “Welcome. I’m so glad to see so many of you here,” he began.

He lowered his gaze so he could get a good view of the people who filled the room. There weren’t enough seats for them all, so many stood against the walls. He’d need to rent out a larger room for the next gathering.

Dorian didn’t speak the commands, but he didn’t need to. The audience was already obeying him. He felt it in the energy of the room. No one moved a muscle as they waited for him to continue.

“I’ve been telling you all along that change will not come easy. I will never lie to you, no matter how much simpler that would be for me. So many have lied to you your entire lives, and you all deserve so much better than that. I’m so glad to see all of you still here, so willing to do all it takes to succeed. I even see some new faces tonight. That’s wonderful.” A clip-on microphone carried his words effortlessly over the people assembled before him. “I will shelter you when you need it. I will do whatever I can to build you up into the most powerful people you can be. Those you love may look down on you now. They may think you’ve lost your minds. From their perspectives, they see a stranger who doesn’t know your way of life. They probably think I’m selling you a bag of goods that can’t possibly be real. When they talk badly about me and the changes you’re making in your lives, they genuinely feel as though they’re doing the right thing. They think they’re saving you.” Dorian laughed. “They couldn’t be more wrong.”

“If you follow my regimen, it’s only a matter of time before they see how mistaken they’ve been. By eating the right foods, doing the right exercises, and removing yourself from toxic family and friend relationships, you can ascend to something greater.”

“Are you ready to walk away from the old and embrace the new?”

The applause was thunderous. People cheered and called his name. He closed his eyes and let the waves of adoration wash over him.

This is where I’m supposed to be. I have the power to shape people the way I want them. They're mine.