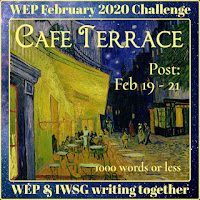 Hello everyone! It's time for the first WEP challenge of 2020! The theme for this month is Cafe Terrace. If you'd like to join in on the fun, head over and sign up!

I could have gone in a romantic direction. February is the perfect month for that, after all. That's not what happened, though. I sat down to write, and my brain took me in a different direction.

I hope you enjoy!

The warm moonlit night had enticed many to come enjoy a bit of dinner on the café terrace. Each table for two had been claimed by couples old and young. The background chatter filling the air had a bright, happy note to it. People wanted to be here and were relishing in their time.
Amelia’s stomach was in knots as she approached her table. She spent a full hour going through her closet to pick out the perfect dress. She ended up choosing a soft pink satin dress with a skirt that fell just past her knees. The matching pink high heels hugged her feet too tightly. She received them as a gift a year before, but seldom wore them due to the discomfort. For this night, though, the right look mattered too much to be deterred by a few blisters.
She took her seat across from a man she’d never met and waited for him to say something.
“I’ve ordered a bottle of wine.” The man’s face was several days unshaven, and his dark eyes were submerged in shadow. His black pinstripe suit would have looked at home in a court room, though this man operated on the other side of the law.
The candles flickered from the center of the table, casting a romantic light. Amelia clenched her fists in her lap. “I’m not old enough for wine,” she said softly, not wanting anyone to overhear her admission. This wasn’t to say she’d never sampled wine before, and worrying about the illegality of consuming alcohol seemed ludicrous given the circumstances.
He put his finger to his lips. “Shh. Let’s keep that between the two of us.”
“Okay.” Amelia would allow him to have his way for the moment.
“I’ve also ordered your food,” he said matter-of-factly, as if such an act were a foregone conclusion.
Anger licked at her insides, but she kept her face relaxed. Betraying fear or frustration would only empower the man. “I can’t wait to try it,” she said, keeping her words level.
He leaned forward on his elbows and studied her. “Amelia. That’s such a pretty name.”
She looked him in the eye. “Do you have a name?”
The man shook his head. “Not for you, I don’t.”
Amelia couldn’t allow his defiance to rattle her. A waiter approached their table then, and they lapsed into silence as he poured them each a drink. The red liquid in Amelia’s glass glowed like a ruby as she picked it up and took a sip. The wine was dry and strong. That strength helped fortify her. 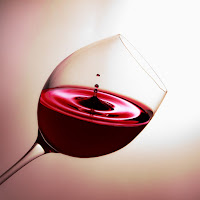 Once the waiter was out of earshot, she spoke again. “Very well. I don’t need to know your name to say this. You need to leave me and my family alone.”
The man’s smile grew, revealing a chipped left canine tooth. “We need to discuss terms, and I prefer to do that over food. Be patient. Have a drink. Try to smile a little. That sour look on your face will draw attention.”
As much as Amelia didn’t want to draw attention, she didn’t appreciate being spoken to in that manner. She sat up straight, her spine rigid. Her parents taught her from a young age how to project confidence, and she needed those skills now more than ever. “I think you misunderstood the purpose of this meeting. We aren’t discussing terms. I came here to warn you. Blackmailing us is a mistake. You need to back off. My family will do a lot to protect one another, but that doesn’t involve acquiescing to your demands.” She waved her right hand, as if dismissing an invisible fly.
A red dot appeared on the man’s forehead. She averted her eyes, not wishing to draw attention to it.
“This is your last chance to change your mind. I will release the information. You and your family will be destroyed,” he said, a sick pleasure lacing his words. He clearly thought he’d either receive a great reward for his silence or the pleasure of watching her family go down in flames.
“No,” she said with conviction. “This is your last chance. You need to leave my family alone. You’re not the one calling the shots here. I am.”
His face darkened, a bulging vein popping out in the center of his forehead. The red dot lingered there right beside it. “Listen here little girl, you obviously don’t know who I am. I can make your life a living hell.”
The man’s voice was increasing in volume, and it wouldn’t be long before he drew unwanted attention their way. She had to put an end to it. And with one more wave of her hand, she did just that.
It all happened silently. One moment, the red dot was there. The next, a round hole replaced it, and the man’s eyes grew wide. He fell forward a couple seconds later, smashing into his wine glass in the process. The red liquid spilled forth, soaking the pristine white tablecloth. The stain spread quickly, soaking the fabric around him.
Amelia covered her mouth and cried out. The tears came easily, steaking down her cheeks. She’d always loved acting.
The patrons surrounding them turned to look, many of them jumping up from their chairs or ducking for cover as soon as they spotted the deceased man. They scrambled for the exits, trampling each other in the process.
She followed suit, eager to leave this place behind her. Her duty to her family was done. She’d protected them, and no one would suspect she had a thing to do with it. Her father would be proud.