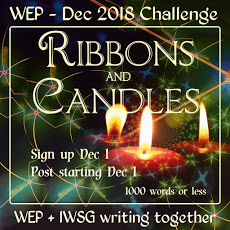 Is it December already? I honestly don't know where the year has gone. It's already time for another WEP/IWSG challenge! The theme for this month is Ribbons and Candles. There's so much room for interpretation with this one.

I intended to write a happier story than the one I ended up writing. I don't know why my mind tends to go dark with these prompts. Maybe that's just the kind of person that I am.

Now on to the story! 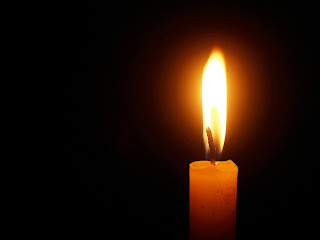 Tied With a Bow

Terra’s mother spent an hour meticulously brushing her long black hair and weaving silky red ribbons into her braids. Those patient hands finished the task by patting them gently into place and resting there for a long moment.

The dress Terra wore was the same shade of red as her ribbons and shone softly in the dim light of her bedroom. The candles on her bedside table cast flickering shadows on the walls. When she was little, she used to imagine those shadows were monsters creeping in the night. At age fifteen, she was too old for that kind of nonsense. There were monsters in the world, but they didn’t lurk in the shadows. They looked you right in the eye and told you how they intended to take your life away.

Now that the preparations were done, Terra’s mother sat in a chair in the corner of the room. Her face was entirely bathed in shadow, but her eyes reflected just enough of the light to remain visible. They remained fixed on her, gaze unwavering. Terra imagined her mother was trying to burn these last moments with her into her mind so she could remember every detail. Or perhaps her mother would end her life soon after the carriage left, and she wanted to have these last moments to reflect on her decision. She wouldn’t be the first parent to have taken this escape route from her grief, after all.

A soft sob came from the other end of the room. The twins Gabby and Danielle huddled together on the bottom bunk of the bed they shared. They too were wearing fine dresses, Gabby in emerald green and Danielle in powder blue. Their blond hair, however, showed a distinct lack of care, the ribbons not so painstakingly done. They were orphaned when they were five, so a woman named Dahlia had to do it for them. Unfortunately, there was much work to be done, so Dahlia didn’t have time to strive for perfection.

Terra lost her own father at the same time the twins lost their parents, and the memories of him grew fainter with each passing year. She sat on the edge of her bed, gathering her threadbare blanket in her hands for the final time, and wondered what he would think of all this. Would he have been horrified? Would he have understood the necessity of it all? Terra didn’t dare ask her mother. Even now, a decade after losing him, the very mention of her deceased husband brought her to tears. Terra preferred to fantasize that he’d have stepped in to stop it, that maybe he’d have gathered his family and led them to safety under the cover of night.

It was a silly fantasy, though. Disappearing into the night without a large group or weapons was far too dangerous. Only a crazy few attempted to go outside the bounds of established communities.

When the graves spilled forth their dead ten years prior, it seemed the entire world had ended. Death was an inescapable fact, and all would turn. Unlike fiction that existed prior to the apocalypse, destroying the brain wasn’t enough. Bodies had to be burned to ash to prevent the unholy resurrections from taking place. This made ridding the countryside of the lurching dead particularly difficult.

Safety and survival became the ultimate goal, and many were willing to pay any price to achieve that for themselves. The most violent of the survivors banded together and offered other communities their protection, but at a high cost. Of course, those in charge were never left to pick up the tab for that security. They fancied themselves too important for that. Terra imagined one of those creepy old decision-makers being forced to weave ribbons in their hair and be presented as gifts to their violent overlords. It would never happen, of course, but it made for a more pleasing fantasy than most.

A soft knock on the door interrupted Terra’s troubled thoughts. A moment later, Dahlia leaned inside and spoke. “The caravan has arrived. You need to come downstairs now.”

Terra’s mother let out a choked sob. She longed to comfort her, but she feared if she wrapped her arms around her mother’s frail frame, she’d never let go. Terra stepped forward, her chin held high. Gabby and Danielle fell into step behind her, though their tears continued to fall. Terra felt the urge to cry bubbling beneath the surface, but she forced it down. She refused to give anyone the satisfaction of seeing her break down.