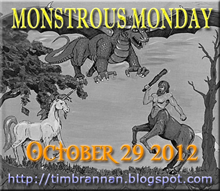 I love Halloween and all the ways bloggers are choosing to celebrate in the blogosphere!  It's been so much fun participating.

This is my post for the Monstrous Monday Bloghop that Tim Brannan is hosting. For those of you who might like to hop in while you can, here are the rules.
Now, isn't that easy?  There are no real rules beyond that.  You can post about anything monster related, whether it be about a monster you love or hate, a monster you've created, or a rambling dissertation on the nature of monsters. The point is to simply celebrate monsters in some way.

When I thought about what I wanted to do for this, I realized I wanted to choose a monster from a science fiction show.  I love the genre, and it comes up with some interesting beasts.

I decided on a monster that I saw in an episode of Star Trek Voyager.  The episode is entitled "Bliss" and it's from the fifth season.  In this episode, the crew are subjected to telepathic control and false readouts on their instruments, which leads them to believe they've found a wormhole that will take them straight home.  Only Seven of Nine, The Doctor, and Naomi see that all is not what it seems.  Once the ship passes through the supposed wormhole, all the crew members under this unknown influence are rendered unconscious.

Seven, Naomi, and The Doctor meet the alien Qatai.  They learn they've entered a space dwelling beast who consumes space ships for food.  This creature uses its telepathic influence to show unsuspecting travelers what they want to see and lure them inside where it slowly digests them.  The story is similar to Moby Dick. Qatai is obsessed with killing this creature and has been after it for a long time. Over the years, he'd grown mostly immune to the creature's tricks, but one day it got the better of him.  Qatai knew where to strike to kill the creature, so it used that goal to lead him astray and trap him.

That's a scary monster.  While under its influence, you can't trust your senses. How can you coordinate well enough to get anything done when no one knows what's real and what's not?  The beast is massive and you can't reason with it for your release.  All it needs or wants from you is for you to die to it can feed off you.

After thinking about this particular monster for awhile, I began to wonder what a monster really is.  This creature killed only to feed.  It didn't kill for personal enjoyment.  It didn't kill for sport.  It did what it did for survival.  When you look at it like that, the creature looks less monstrous.  We kill animals for food too, and we hardly consider ourselves monsters.

Yet, when something threatens our lives, regardless of motivation, it seems like a monster.  It's dangerous, and regardless of what its reason for killing us might be, we're still dead if it catches us.  I guess the label of monster depends on its relation to us.  We label it as such because our life, and our security, is endangered by its existence.

So, what makes a monster a monster?  Here's a list of characteristics that I thought up to inspire discussion.  I will not claim this list to be complete.  There's always more to add.

This is a short and general list, and I'm sure I missed something important.  So feel free to contribute your own idea in the comments.  What makes a monster frightening for you?  Are inhuman beasts the most frightening?  Or does a human with no regard for life more of a monster in your view?