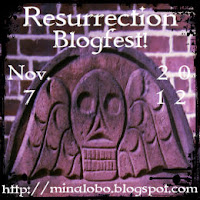 The fabulous Mina Lobo is hosting the Resurrection Blogfest to celebrate her one year blogoversary.

I started this blog on Monday, January 9, 2012.  So I haven't yet been in the blogging world a year, but I've learned a lot since I embarked on this journey.

This was posted on Monday, January 30, 2012, so I was still in my first month as a blogger.  It was my three week blogoversary, in fact!  It's no wonder I got zero pageviews for this one, because hardly anyone knew I existed at this point.  Looking at it now, I wish I'd added a nice picture to go along with the poem, but I was inexperienced at the time.  Plain though it may look, I present it to you now as it looked when I first posted it all those months ago.

Strange as it may sound, I wrote this poem hoping to express my love for writing science fiction.  Some may not believe that science fiction and poetry go together, but to be honest, I think its an inclusive enough genre to accommodate just about anything.

With pen in hand and blank paper,
I set out without a plan.
I can only recall that fateful inspiration,
when my need began.

The dazzling lights of darkened skies
lured me into flight.
Always hoping a ship would come,
a dream realized one night.

It landed in an eerie hush,
only a background hum.
The curved surface, round and smooth,
my heart pounding like a drum.

Within it lay the promise
of all the things to see.
The boundless wonders of the universe
finally opened up to me.

With lofty dreams and bated breath
I climbed up to the stars.
Sailing through the vastest sea,
beyond the moon and Mars.

Daring to do that which no others
have yet been able to do.
Looking out before me, I know
that I’ll never have a clue.

Tripping over the edge of the galaxy,
so large, and yet so small
compared to the universe itself.
One can never see it all.

Though in reality I may never leave
the gravity of this world
I will always look out to the sky
and see those fantasies unfurled.
Posted by L.G. Keltner at 12:00 AM