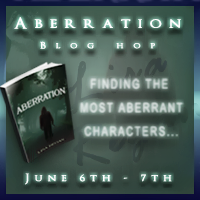 Lisa L. Regan is hosting a blog hop to celebrate the release of her second novel Aberration.  Here are the details.

ab·er·ra·tionDefinition of ABERRATION1 : the fact or an instance of deviating or being aberrant especially from a moral standard or normal state2 : unsoundness or disorder of the mind3 : an aberrant individual— ab·er·ra·tion·al  adjectiveFrom the Merriam Webster Online Dictionary

Here are my choices.

1. Sylar from Heroes-He was dangerous, he was dark.  He would cut your head open to learn how your powers worked.  What isn't messed up about that?  Zachary Quino did a great job playing this warped character.
2. Dr. Thredson from American Horror Story: Asylum-He had messed up fantasies.  He kidnapped and skinned women.  Yuk!  This character was also played by Zachary Quinto.  Perhaps my choice of these two characters has a lot to do with his masterful acting.
3. May from May-She's a socially inept girl who ends up murdering people and taking the parts of their bodies that she likes to make a human-sized, rotting flesh doll.  Hey, she only wanted to have a friend who wouldn't turn on her.
4. Annie Wilkes from Misery-She's a writer's worst nightmare.  Crazed fans can be scary, and it's not an unrealistic scenario either.  Kathy Bates did a great job with this roll.
5. The Joker from The Dark Knight-He doesn't tell a consistent story about his past, so there's no hope of understanding him or what he'll do.  He's chaos.  Disorder.  Mayhem.  The unpredictability makes for a great aberrant character.

What are your favorite aberrant characters?