More Than Just a Kiss Blogfest 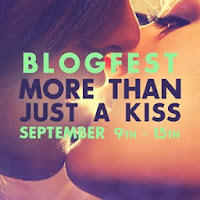 I'm here to post my entry in the fantastic More Than Just a Kiss Blogfest. This blogfest is hosted by Christine Rains and Cecilia Robert, who are a couple of amazing bloggers if you ask me!  (Not that you did ask me, but I thought I'd offer my opinion anyway.)


The rules are simple:
1. Sign up on the linky list and post the badge on your blog.
2. On one of the days of the week of September 9th, post a kissing scene on your blog. It can be either fiction or non-fiction.
3. Please do not exceed 250 words.
4. This is a blogfest, so visit the other participants and have fun!
And there are prizes!  Be sure to check out either Christine or Cecilia's blog to see what those prizes are.  Personally, I think the prizes rock!  (There I am, offering up unsolicited opinions again.  I just can't help myself!)

Here's my scene.  I felt like going for an awkward kiss.  We all know they exist, right?  Not every kiss can sweep you off your feet, after all.


Mitchell watched in bewilderment as Celia closed her eyes and leaned in.  Her blonde eyelashes fluttered rapidly against the pale skin of her cheeks, and he wondered if it was due to nervousness.  He hoped so, because his own fifteen-year-old heart was threatening to hammer out of his chest and slam into the far wall.
Her nerves, of course, bore little resemblance to his own.
Clamping his eyelids shut, he waited.  Moments later, the warm, slightly chapped skin of her lips made contact.  When she moved her mouth against his, he awkwardly attempted to mimic her, his hands held rigidly against his sides.  Her tongue darted out and trailed along his bottom lip, leaving a line of moisture behind.
First kisses were supposed to trigger butterflies.  Sparks were supposed to fly.  Yet he felt nothing but mechanical and out of place.
Most of the boys in school would have endured any humiliation to get a chance to kiss Celia Prendergast.  His best friend David numbered among them.
David.  Thinking of him triggered an ache deep in Mitchell’s chest.  Raven hair, sparkling emerald eyes, the way the corner of his mouth quirked up when he smiled . . .
But David couldn’t know.  Mitchell couldn’t imagine facing the world if anyone knew.  So he went through with the kiss he didn’t want, hoping no one would suspect the truth.
When Celia pulled away, he hesitantly opened his eyes, hoping he wouldn’t see a burgeoning knowledge of his secret scrawled across her face.
Posted by L.G. Keltner at 11:31 PM