I'm here with my entry for the Write . . . Edit . . . Publish December Challenge: Celebrations That Are Out of This World!  Before we get there, though, I'd like to take care of one order of business. 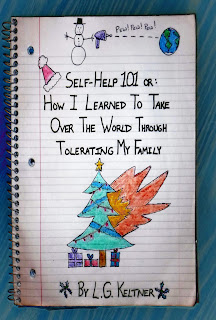 This is the final day of the blog tour for my Christmas novella Self-Help 101 or: How I Learned to Take Over the World Through Tolerating My Family.  Today I'm with Cathrina Constantine.  The subject for the day is mistletoe.

Also, this is your last chance to enter to win a free copy!  What are you waiting for? Enter below! 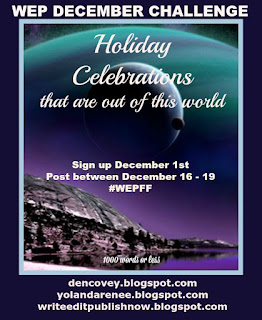 Now let's get on with the challenge!

“Our days together are passing far too quickly,” I whisper.  I run my trembling fingers through Rafael’s dark hair as the sun rises again, bathing us both in light.  The rays catch Earth’s atmosphere for a few moments, making it flash a vibrant blue, and it looks as if the entire planet hasn’t been rendered uninhabitable by a brutal war.
This is sunrise number eight.  Our time together is halfway over.  Eight mini-days remain.
“That’s why we’re going to make the most of them,” Rafael says.  “It’s beautiful, isn’t it Anouk?  Imagine how different it would be if we could live down there.”
It’s a breathtaking thought, even more stunning than the marble of a world rotating quietly below us or the deep brown of Rafael’s eyes.  Maybe it’s masochistic to even entertain the notion, but this is the one 24-hour time period out of the entire year when I allow myself to do it.
“We’d get a house,” I say.  “I’ve seen some pictures of what they looked like.  We’d have a house with a lot of rooms, a porch, and a yard with grass.”  There, inside our house, all of our days were long and full.
Rafael hums in approval as he reaches for my hand.  His palm is calloused from years of hard labor.  In his section of the station, everyone who’s capable of doing so is expected to start working full time at age fourteen.  Seven years have passed since then, and I’ve seen plenty of other changes that came along with the roughened skin.  His smiles came more easily.  His laughter once shook his whole body with its strength.
“Grass.  I wonder what grass smells like.”
I shrug.  “No one knows, so I guess that means whatever we imagine is the truth.  There’s no one here to tell us otherwise.”  It’s a childish idea, and I know it.  No matter how hard I try to ignore reality, it won’t go away.
We have eight orbits left.  Eight more cycles of ninety minutes apiece before we go back to our respective lives.
“Our own little truth that no one else knows.  I like that.”  He smiles.
“Me too.”
I cast my eye around the mess hall that’s been rearranged for the day.  The banner proclaiming “Happy Unity Day!” is drooping above the doorway and looking rather ragged around the edges.  This is understandable considering it’s been used for at least the last five years.  Supplies are limited, so this holiday that was conceived on our little island in space doesn’t typically have much in terms of decorations, but that isn’t much of a problem.  It’s sandwiched snugly between Hanukkah and Christmas this year, the timing meant to piggyback off the general feeling of goodwill that’s supposed to abound.  Judging by the distance separating the small clusters of humanity that dot the room, the feeling of goodwill wore off a little while ago.  Most people have already made their way back to their respective parts of the station.
“Do you think your mother is still watching?” Rafael asks.  He must think that’s the reason for my distraction.
I can almost feel the gaze of the camera piercing my back.  “I’m sure she is.  She says that she’s obligated to keep a close eye on things since this entire station is her responsibility, but I know better.”  She’s never liked that I fell in love with a Laborer.  She’s reminded me time and again that there’s no future in it, and I know she’s right.  As an Administrator, I’m destined to end up with a fellow Administrator.  If only she understood that I can’t just turn my feelings off.
“What if we could run?  We’d go and hide in another part of the station for a few hours,” Rafael says wistfully.  “We could pretend we’re in our house where we can spend our days however we like.”
I’ve pictured this many times before.  What would it be like to steal a few private moments, to have something more than the supervised hours of daydreaming a life together?  Unfortunately, time alone could lead to unsanctioned babies, and had in the past.  That’s why this holiday is governed by such stringent rules.
Each section of the station needs to maintain a certain population size, and the people who live there perform their predetermined tasks.  They have children with people within their section.  Educational resources are allocated accordingly.  We’re told that, with such a small population, we need to do all we can to maintain stability.  The sacrifices we make are for the greater good.
Sometimes I even believe that, but not today.
“That would be amazing.”  I lean against his shoulder, savoring the feeling of his arm sliding around my waist.  The rules might be taking a lot away from us, but they can’t take this away.  Not yet, at least.
One year, hopefully a long time from now, Rafael will tell me that he’s married someone he can have a future with, or it will be me telling him the same.  We’ll both look back at the previous Unity Day and reflect on how we didn’t know it would be the last one we spent together.
We’ll have children with other people, as we’re expected to do.
We’ll live according to the rules of our classification.  There’s no other choice.
Until then, we’ll spend this holiday pretending each turn around Earth represents one full day, and we’ll fill that time with all the happiness we can.
Eight miniature days left. Eight orbits around a dead world.  While it’s impossible not to think of what might have been, I don’t want that to be all we have.  I kiss his cheek, the stubble scratching at my skin as I slowly pull away.  “You know what is amazing, though?”
Rafael is running his fingers through my hair now.  “What?”
“This here.  This is pretty amazing too.”