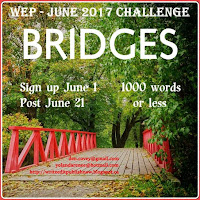 It's time once again for the WEP Challenge courtesy of Yolanda Renee and Denise Covey!

The theme this month is bridges.  I thought a lot about this one, but in the end, this story kind of flowed out of my fingers, taking twists and turns on its own.  It's always fun when that happens, isn't it?

The Bridge to Home

Serafina leans forward, resting her forehead against the night-chilled steel support.  The water below slides beneath her feet in a rush, the moonlight occasionally catching upon poorly defined shapes she’s not certain she wants to see clearly.  She takes a deep breath, but it doesn’t seem to be enough to fill her lungs.  Not anymore.
The distinctive sound of footsteps on the ancient wood planks of the bridge fill the otherwise silent night.  Serafina doesn’t bother to turn to see who it is.  She doesn’t need to.  Only one other person knows to find her here.
“You’re not going to do it, are you?” Harley asks, her typically mellow voice tight with concern.   The wood groans as she settles beside Serafina.
Serafina doesn’t answer, because she honestly doesn’t know.  She’d have told her best friend if she did.  They’d never kept anything from each other before.
The silence stretches out, tugging on the air between them until it’s pulled so tight that it feels as if the night itself might snap from the tension.
“What if he was right?” Serafina finally asks.  “He seemed so sure, and they never found a body.  You’d think three years would have given them plenty of time to do that.”
“It also would have given Jax enough time to get in touch with you if he was still alive.”  Harley’s words don’t sound cruel, but they cut just the same.
Serafina pulls away from the hand Harley tries to latch around her wrist.  She can’t expect her to understand the sheer need thrumming through her veins.  “Jax was the only family I had left.  What else am I supposed to do?”  Their parents disappeared one night a decade prior without explanation.  Jax, who was eighteen at the time, took care of Serafina.  Just before she herself turned eighteen, he started telling her stories of merpeople and unseen underwater kingdoms.
“I need to go home,” he’d told her, his emerald eyes burning bright with what she feared was madness.
“But you are home.”  Serafina had tried in vain to convince him of that, but he couldn’t be swayed.
Harley sighs.  “Jax was a wonderful brother, okay, but he had problems.  You know that.  You told me all the stories.  And I get it.  Maybe you need to believe that he and your parents are still out there somewhere going about their lives and waiting for you to join them.  I can’t blame you for that, but if you do this, you’ll only end up killing yourself, and that won’t solve anything!”
Serafina stands up, Harley’s panicked words reminding her of the fateful night that Jax had brought her here to this bridge.  His fluffy brown hair had almost danced in the breeze, the moonlight reflecting off his bright eyes as he climbed over the railing.  Tears were streaking down Serafina’s cheeks, her nose running from all the crying she’d been doing in the car.  “Please, Jax, you can’t do this.  Don’t leave me!”
“You can come with me,” he’d insisted.  “We can go together.”
She felt so sure at the time that he was committing suicide in from of her, and distraught though she’d been, she wasn’t prepared to follow through with that.  She shook her head resolutely.  “No, I can’t, but I don’t know if I can stay here without you, either.”
Jax’s smile was soft and a little sad.  “You’ll be just fine, Fin.  Don’t doubt that.  You can come when you’re ready.  I’ll be waiting.”  Then he let go, and she looked on in horror as the angry water below swallowed him whole.
She’d been so sure at first that he died that night, but the years that followed ate away at that certainty, and the stories Jax told, ones he said that their parents passed on to him before they left, seeped into the holes until nothing but a need to see all of them again remained.
Harley is speaking in a rush behind her, but the words won’t reach her ears, as if Serafina is already under water and unreachable.  “Take care of yourself, Harley, and don’t worry about me.  I’ll be fine.”  Her voice is confident.  Strong in a way that it hasn’t been in a long time.  “I will miss you, though,” she adds after a moment.
Then she lets go.  The freefall lasts only a couple of seconds, but the lightness in her bones makes her spirit soar.  I’m coming home!
Dark shapes swirl just below her as her body pierces the water’s surface and sucks her under.