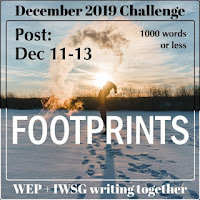 Hello everyone! It's time for the December WEP Challenge! I can't believe 2019 is almost over already. Where has the time gone?

If you'd like to join us in writing about FOOTPRINTS, check out the sign-up post for more details! And thank you to the IWSG's Tyrean Martinson for coming up with this lovely prompt!

Cami hugged her puffy green coat tight around her body. She would have zipped it, but her little fingers had yet to master that skill. She knew how to investigate things, though. Cami was an expert at finding clues. She knelt beside the ladder that led up to the roof. She couldn’t recall seeing it there yesterday while she played in the snow.
“Stupid Dylan,” she muttered under her breath as she shivered. She would be inside playing with her new toys if it weren’t for him. But no. He had to go and say something ridiculous, and now she had to prove him wrong. Big brothers could be so dumb sometimes.
She crouched low and studied the boot prints in the snow. They were huge! She held a mitten-clad hand above it and could only cover the heel. Then she poked gingerly at it, and when she pulled her finger away, the tip was covered with a light dusting of snow. The snow was fresh, then. It must have fallen in the night while she slept.
“These are new,” she said to herself. No doubt about it, then.
The first boot print had been made at the base of the ladder, which meant someone had been on the roof and climbed down. Cami straightened and followed the tracks. They wound their way around the house, coming close to the hedge that bordered the yard more than once. Cami hopped over the line of rocks that outlined the barren flower bed and onto the snow-dusted patio. The prints weren’t as deep here, of course, but they were distinct. She stopped there for a moment, following the tracks to their end point with her eyes.
“Yes!” Cami squealed, her cold cheeks aching from the size of her grin. She’d been right about Santa!
Cami used to worry about the fact that their house didn’t have a fireplace when she was younger. She even went to her mother with her concerns. “Mommy! How can Santa get into our house? We don’t have a chimney for him!”
Her mother smiled. “Santa doesn’t need a chimney, honey. Do we need a chimney to get into the house?”
Cami had blushed, feeling silly for her panic. “Okay.” She started to shuffle out of the room before another frantic thought flew into her brain. She spun around and rushed back to her mother’s side. “Don’t lock the door! He won’t be able to get in if you lock the door!”
“I promise I won’t,” her mother said with a little laugh.
She’d believed her mother, of course, but finding the evidence was better than taking her word for it! This was proof that Santa used the front door! A small smile crossed her face. Dylan was wrong. It was so mean of him to tell her Santa wasn’t real, especially when the truth was so obvious! She broke into a sprint. She needed to tell him what she’d seen! He’d surely see the boot prints and understand how mistaken he was.
She barreled through the door, kicking off her shoes as she went. She skidded through the entryway, stopping only when she ran into something wet and cold. “Eww,” she groaned as the dampness spread through the bottoms of her socks. She traced the puddle of water to her dad’s winter clothes that he’d tossed carelessly into the corner. Mommy would be so mad about the mess he'd made.
Oh well! Cami had more important things to worry about. She shucked off her soiled socks, leaving them behind as she ran off to find Dylan and tell him the good news.