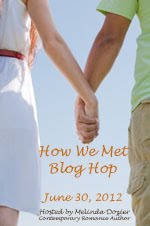 Okay.  It's time for the How We Met Blog Hop, hosted by the lovely Melinda Dozier. Without further adieu, here's the story of how I met my husband.

Home from my freshman year at college, I was perusing the graduation announcements for the class below me.  I scanned the pictures, looking for my friends.  Then I spotted an abnormality.  A boy I'd never met.
He had blond hair and a winning smile.  His name was below the photo.  Jamon.  An odd name, I thought.
A couple minutes later, there was a knock at my door.  When I opened it, I was stunned.
My friend Mike stood there, and standing next to him was Jamon.  Granted, his hair was messier than his picture, and he was wearing a black band shirt.
I had the strangest feeling about Jamon.  I knew he was going to be important to me somehow.  Of course, I said nothing of it.
I gave Mike a hug.
Jamon looked rejected.  "What about my hug?"
I started dating Jamon a month later, and we're still together.


Now, oddly enough, I don't have access to any of our older photos right now.  Some are lost, some are stored away somewhere.  We didn't get a digital camera until well after everyone else had them.  The oldest photos I have are from our wedding. Jamon and I met when I was 19 and he was still 17.  At our wedding, I was 21 and he was a few weeks away from being 20.  Not too bad, right?  These pictures resemble what we looked like when we met better than they resemble what we look like now.

So here you go.  And I'm putting more of Jamon because I've posted a lot of wedding pictures of me on this blog before.  Go HERE to see the others.

Email ThisBlogThis!Share to TwitterShare to FacebookShare to Pinterest
Labels: How We Met Blog Hop