Language of the Heart

Today I wasn't sure what I wanted to talk about.  Sometimes topics don't readily present themselves, and part of having a schedule is forcing yourself to produce writing whether it comes naturally or not.

I decided to reach for a source of inspiration.  For me, a quote works well for that.

Yes, I use quotes a lot, but I enjoy analyzing them.  I don't simply look at what someone said and go "Yeah, that must be true.  This person said it, after all."  If we all treated a quote this way, they would indeed be absolutely useless.  I know I've read quotes about quotes (which is enough to screw with your mind all on its own), and many of them insinuate that using quotes is a form of intellectual laziness.  If you automatically take the quote as gospel and accept it without reflection, then yes, you are being lazy.

When I find a quote that speaks to me, I like to consider why that is the case. Does it say something that feels right?  Does it infuriate me?  What is it about my personal experiences and beliefs that ignites my reaction?  In exploring that reaction and forming my own opinion about the quote in question, I am flexing my intellectual muscles.  There is nothing lazy about the ways I use quotes in my writing.

Wow.  In picking a quote for today, I raised a topic of conversation separate from the reaction I intended to showcase here. 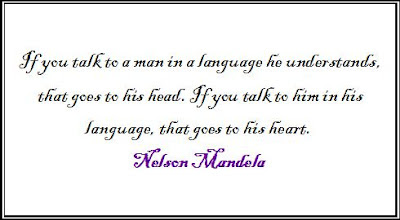 I love this quote, and it spoke to me the first time I saw it.  I'll tell you what it says to me.  Language is a powerful thing.  It isn't simply something we use.  Our native language is who we are, and it's the way we interact with the world. Everything around us is defined in our minds by a name.  As we grow up, we learn language and the realities of the world concurrently.  Children are shown an object and learn the name for it at the same time.  Name and image become one.  The identity of the object is contained within the word we use to describe it.  When we speak to someone in our native language, the conversation flows easily, because the language of our thoughts corresponds with the words we hear and utter in return.  We can appreciate the words exchanged with such a depth of understanding because those words are part of our identity.  The nuances, the inflections, the color and flavor of the discussion can be savored because we don't struggle to understand the most basic meanings.  It isn't about simply interpreting the words, so we're free to go further than the basics.

I know for a fact that speaking in a second language is much different.  If a child learns multiple languages early on, they can freely change between them without difficulty.  However, for those of us who learned later on in life, it's far more complicated.  I took Spanish for four years in high school, and I always did well in the subject.  I learned a lot, and one of the things I took away from the experience was an understanding of why the above quote is true.  Before speaking, I formed the thought in English and consciously translated it in my head.  The words always come first in English.  It takes significant effort to translate them and send them out into the world.  Then, whenever I got a response in Spanish, I had to listen more carefully and consciously align those words with the English version.  When you spend so much time focusing on this process, you're working from intellect and not instinct.  Communication is more than possible, but that barrier is always there.

You think first in your native language.  There's no way around that, because it's written into your mind.  Your world is written in it.  You exist as you do in your world due to your linguistic relationship within it.  This is part of the reason why I love language as much as I do.

I've gone on too long already, and there's plenty more to say.  Does anyone have any thoughts about this issue?  How might linguistic differences create conflict in the world?  How can we find ways around misunderstandings?