Vampire Bite Blog Hop: A Drink in the Sun 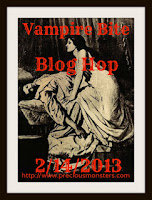 The Vampire Bite Blog Hop seemed the perfect way to celebrate Valentine's Day.  A big shout out to our host Jolie Du Pre of Precious Monsters for coming up with the best blog hop ideas ever!

I decided to write a piece of short fiction to share with all of you.  I hope you enjoy it!

A Drink in the Sun

The barren ground had cracked beneath the harsh rays of the swollen sun, leaving it so devoid of moisture that it hardened Vane’s feet with each day of travel.  Her shoulders ached from the weight of the boy’s motionless body.  He’d lost the strength to walk days ago, so she had to drag him along like a piece of luggage.  Years of malnutrition at least left him far lighter than he should have been.

Vane adjusted him to redistribute his weight, and a low moan sounded by her ear.  If he was beginning to stir, it would be a good time to stop and rehydrate.

She carefully lowered him to the ground.  Being rash and breaking his bones by dropping him would only make traveling more difficult.  The boy immediately curled into a ball and tucked his bandaged wrists protectively against his chest.

No, he isn’t a boy, Vane remembered as she looked down at him.  Young yes, and frail certainly, but officially a man by human standards.  She had trouble remembering human rituals and distinctions.  It had been so long since they meant anything to her.

She knelt down and brushed his dirt-caked dark hair from his face.  He blinked back at her, his dark eyes wary.  When Vane pulled a small bottle of liquid nutrition from her backpack and handed it to him, he forced himself into a seated position.  He took small sips, swishing them around to wet his parched mouth.

As she watched him, she noticed how different he looked than he did when she took him from the village of Downfall little more than a week ago.  His skin was an angry red, and the blisters were forming beneath the surface.  Soon they would burst through, releasing an alarming amount of the precious moisture his body needed to stay alive.  Even if he didn’t dry out, the onset of radiation poisoning would most likely kill him before the end of the year.  Or, if he was unlucky enough to have the one-in-a-million genetic anomaly that Vane had, he too would slowly turn, his ravaged skin becoming a scarred, scaly exterior that would warn normal humans of his deadly nature.

The boy finished his drink and discarded the empty bottle on the ground.  Vane promptly moved in and unwrapped the dressing around one of his wrists.  Several cuts marred the skin underneath.  The severe bruising painted the skin here in shades of brown and blue.  Vane drew out her blade, ready to make then next incision.

The boy’s response made her draw back a little.  He’d never resisted before.  When she approached the village of Downfall and demanded an offering, this one had presented himself willingly.  While others she’d had in the past pleaded for mercy or tried to escape, this boy did none of those things.  So this new resistance made no sense.  “We have an agreement,” Vane reminded him.

Vane replaced the dressings.  She figured he was already hurting enough.  No need to inflict unnecessary pain.  Putting her arms around him, she pulled him into her lap and held the blade against his throat.

She nodded.  When she applied a little pressure, the blade sliced easily through his skin.  The incision, once finished, was small.  Restrained.  She knew from experience that these cuts had to be made carefully.  If she did it wrong, the boy would bleed out.  This one, however, let forth a modest flow of blood.

Vane pulled him up and sealed her lips around the wound.  She sucked hard to draw the blood into her mouth.  The boy whimpered but said nothing in protest.  As the blood ran over her taste buds, a warm sensation built inside her.  She felt the rapid pulse of his heartbeat against her tongue, and it drove her urge to new heights.  It took all she had not to greedily tear the wound wide open and drink the last of him.

Unfortunately, she needed him to last another couple of days, and judging by the slightly watered-down flavor of his blood, he was becoming quite anemic.  It would be difficult to keep him for that long even while barely drinking enough to take the edge off her hunger.  Knowing this, she resolved to end the repast in spite of her unsated thirst.  When she pulled back, leaving a fresh bruise in her wake, she dabbed coagulant on the wound and slapped a bandage over it.

“We should go on,” Vane announced.

“I just need a minute,” the boy responded.  His eyes were barely open.  Lately he struggled to stay conscious after feedings.

Vane acquiesced.  They were silent for several moments before she found herself asking an unexpected question.  “Why did you volunteer?”

The boy’s eyes were closed now, though he wasn’t asleep.  “I had nothing left.  My wife died in childbirth, and the baby was too deformed to survive.  Since I had no one, it made sense for me to hand myself over.  Better than someone with a family.”  Then he lifted his eyelids to look at her.  “Besides, it also helps you.”

“You can’t help what you are.  You’re only doing what you need to do to live.  I can’t hate you for that.”

A pang of some emotion, a remnant of a life long forgotten, resonated through her.  “You’re lonely.  I know what that’s like.”  With nowhere to call home, she could only wander from place to place, taking whatever meals she could lay her hands on.

“When you have to drink the lives of others, that’s the natural result,” the boy said.  Then he closed his eyes again, though this time unconsciousness had claimed him.

Vane loaded him back onto her shoulders and resumed her journey.  As she walked, she pictured the boy’s impending death.  She felt certain he didn’t want to be one of the unlucky few who turned, and she didn’t want to picture that for him.  Her vision showed instead what she’d seen from so many others before.  That last feeding would be one too many.  His heart would simply stop, and she would feel him start to go cold as she struggled to get what little sustenance remained before his blood spoiled.

If that happened before she reached the next village, she would carry him the rest of the way.  The villagers could bury him properly.  It seemed a more fitting end for this boy than leaving his remains to decay in the unyielding sun.