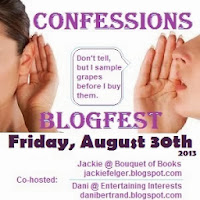 Today is the Confessions Blogfest!  This one is brought to you by the Dynamic Duo, aka Jackie @ Bouquet of Books and Dani @ Entertaining Interests.

What's required for this blogfest?  Luckily, the rules are quite simple.  As Jackie explains:

We want to know what not-so-dark secrets you have. If you want to share the dark ones, by all means, but this is the world wide web, so... yeah, that saying "What happens in Blogosphere, stays in Blogosphere" ... That probably won't happen, so use your own discretion.

The sky is the limit when it comes to confessions.

I have many personal secrets that I would never be brave enough to share with the blogosphere.  However, there are plenty of mildly embarrassing/intriguing things I am willing to share with all of you.

Confession#1: I take favorite scenes from books and replay them over and over again in my mind.  I even assign them a soundtrack that I feel captures the moment of the scene for me.  It's like I'm directing a movie in my head.

Confession #2:  When a book or movie has a sad ending, I make up my own alternative happy ending.  I like sad endings, and I know they have to happen sometimes, so don't get me wrong on that.  Still, when I'm feeling down, I like to whip out those happier endings and think about them.  Maybe this stems from my love of time travel stories.  I like seeing the infinite possibilities contained within each moment.

Confession #3:  The song "Dumbledore's Farewell" from the film Harry Potter and the Half-Blood Prince makes me cry each time I hear it.  That scene in the film is sad enough, but that music really tears into me.  Also, since that song also plays at the end of Snape's memory montage in the film Harry Potter and the Deathly Hallows: Part 2, I cry every time I see that.  Again, the scene is sad enough, but that music brings on the waterworks like nothing else can.  I'm on the verge of tears now just thinking about it!