The calendar tells me that it's Friday, so let's Celebrate the Small Things with VikLit!

I know I've been a tad neglectful of my blog this week.  I could try to make excuses for that, and while I've certainly been keeping myself preoccupied, I can't say I absolutely couldn't have posted more.  My motivation was simply elsewhere.  I'm sure you all know how that goes.

I'd like to celebrate that this Tuesday, my friend Chelsea gave birth to a healthy baby boy.  His name is Felix, and he's absolutely adorable!  It's cool that he was born on 11-12-13.  It's also interesting that he was born at 2:12pm.  Had he been born 3 minutes later, he would have come into the world on 11-12-13 at 14:15 (yes, I'm using military time here because that would have been cool).  Chelsea says that while it would have been neat to have him come that 3 minutes later, the little guy simply had other plans.  Babies come when they come and there's no fighting it.

On the flipside, as new life comes into the world, it is also lost.  I wanted to take this opportunity to offer warm thoughts to Nick Wilford and his family.  They suffered the devastating loss of Andrew, whom many in the blogging community found to be an inspiration.  While we mourn a great loss, we also celebrate the life of a wonderful human being, short though it may have been.  In honor of Andrew and all he added to the world while he was here, red balloons took to the sky all over the world.  And one of them took flight in the small town of Radcliffe, IA. 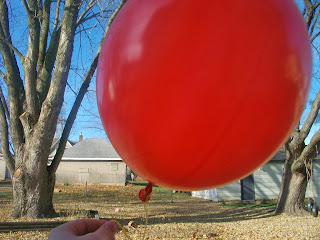