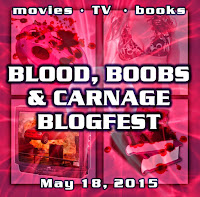 It's time for the awesome Blood, Boobs & Carnage Blogfest!  You can't hear the title of this one and not be intrigued.  It is hosted by the inimitable Alex J. Cavanaugh and the amazing Heather Gardner.

The film I chose for today has all three components. and it's also a little nostalgic for me.  I get to the reason why in a minute. 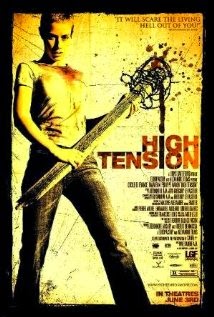 High Tension is a French film, and it was released in the United States in June 2005. It's the movie my parents went to see for their anniversary, and that was the night my now-husband came over to my house to officially ask me out.  When the movie came out on DVD months later, my mom said that he and I should watch it together.

We ended up watching it six or seven times that weekend with various groups of friends.  We wanted to see how they reacted to it.  The reactions were always dramatic. I wish we had some of them on camera.

There is blood.  We're dealing with a psycho killer here, and there's a scene with a saw that had me cringing.  It was a literal blood bath.

There are boobs.  Our main characters are two college-age girls.  They aren't naked, but their clothes are tight, and the one girl is in her cute little pajamas.

There is carnage.  People die, and no one seems to be safe.

This twisted little film also has a twist ending that makes subsequent re-viewings all the more enjoyable.  Upon our second and third viewings, my husband was pointing out how certain shots and the way scenes were constructed hinted at the twist ending.

I feel nostalgic when I remember watching this movie with my husband in his parents' basement for the fifth time while he says things like "Oh, I never noticed that shot before.  That was brilliant."  Good times.