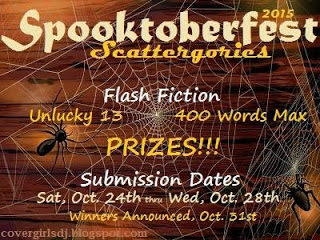 It's that time of year again!  Spooktoberfest is hosted by Jackie @ Bouquet of Books and Dani @ Entertaining Interests.

This year the task was to write a piece of flash fiction 400 words or less and incorporate 13 Scattergory items.  This was no easy task, but here's my attempt at it. 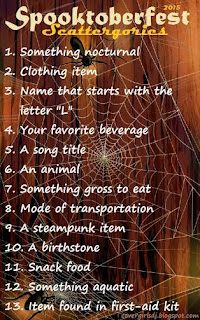 An owl is hooting when the limo pulls up.  I take a sip from my Styrofoam cup.  It’s bizarre that I can do something as mundane as drinking coffee on a night like this.
The back door opens and Lucian appears.  Delicate pale fingers are wrapped around his upper arm.  The jealousy flares red-hot in my veins, but I tamp it down.  She won’t be touching him much longer.
“Who’s she?” she asks.  Her wispy blond locks glow in the moonlight, and her dress shimmers in various shades of blue.
“My cousin.  She’s here to make our evening special.”  The lie falls easily from Lucian’s lips.
I turn on the CD player that’s set up on a foldout table.  The sounds of “Crimson and Clover” fill the night.  Then I gesture to the snack table.  There are potato chips and a bowl of frothy pink punch.  “Help yourselves.  The punch is to die for.”
The girl still regards me with open suspicion.  Typical jealousy.
When Lucian hands her a glass of punch, she takes a long drink.
The drug works fast.  Within a minute, the girl’s emerald eyes flutter and close as she goes limp.  Lucian catches her, and pulling out the steampunk-style pocket watch he stole off a random kid, he says, “We have an hour.”
I won’t need more time than that.
After lowering the girl to the ground, he pulls a tin filled with wriggling worms from his pocket and begins to snack on them while I work.
Once the girl is positioned the way I need her, I flay the fish I caught earlier and spread the entrails over her pale form.  This is not the first virgin sacrifice I’ve done, and I’m glad I lost my virginity early enough to avoid this fate.
The ceremony requires a focus for my power, and the aquamarine stone in my necklace works well for the task.  I grasp it in one hand and reach out to Lucian.  He places a chunk of pink coral in my palm.  One quick slice of his palm, and he’s rubbing his blood on it.  I’ll get him a Band-Aid later.
Lucian, once to be king of the mermen, will soon be fully human.  Just like he wanted.  I might have forgotten to mention that, since I performed the ritual, he’ll be bound to me for life.
Details.

I hope you enjoyed it!  Be sure to check out the rest of the entries!
Posted by L.G. Keltner at 12:00 AM