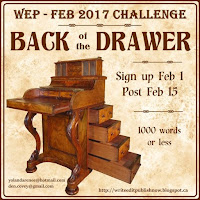 I decided to go for a little relationship drama this time. Enjoy!

I stood over my great grandmother’s antique roll top desk, slack-jawed and stunned.  The paper shook in my trembling hand.  How long had it been hiding in the back of the drawer, waiting for me to discover it?

The sound of approaching footsteps couldn’t shake me from my stupor.

“Sweetie, have you seen my brown dress shoes?” James asked as he walked into the room.

I heard his words, but they scarcely registered.  I was too focused on this wrinkled, yellowed sheet of paper.  It had been lurking in the drawer for years, a constant part of my life without me realizing it.  Its presence remained unexplained, but I had every intention of getting an explanation now.

I held it up as I turned to face my husband.  “What’s this?”

His initial expression of confusion faded into something altogether different.  The color drained from his face.  He couldn’t deny his recognition.  Several tense moments passed before he broke the silence between us.  “It’s a paternity test.”

I stood, waiting for him to elaborate.  He didn’t.  “I know that!  I can read.  Why is it here in the first place?  Why does this even exist?”  My voice rose dramatically in pitch and volume.  Here I was, thinking we didn’t keep any big secrets from each other.  I’d obviously been wrong, and that realization left me standing on shaky ground.

His shoulders sagged.  He collapsed into his burgundy recliner and covered his face with his hands.  “My ex Marlene got pregnant, and she started telling people I was the father.  This was right before we got married.”

My mind was spinning.  I leaned against the wall and slid down it until I hit the floor.  I couldn’t even trust my own legs to hold me.  “This was while we were together, though.”  Not that I needed to ask.  The answer was obvious enough.

James held his hands up, as if that could bridge the gap between us.  “Rachael, listen to me, please.  She was lying.  You can see the results on that paper.  I’m not the father.  She was telling everyone that I was, but I knew I couldn’t be.  I hadn’t slept with her since before we got together, but I was afraid she’d try something.  You know how jealous she was of us.”

I took a deep breath, willing my racing heart to slow to a normal rhythm.  Marlene had indeed been particularly nasty when James and I first started dating.  Normally I would have done my best to avoid her, but her family lived across the street from James’ family.  That’s how they’d come to know each other in the first place.  If it had only been the occasional snide comments, I could have handled it, but the four slashed tires I’d ended up with crossed a line for me.  I had no proof it was her, but I had no doubts about it, either.  “Okay.  If that’s the case, why did you take the test, and why didn’t you tell me about any of this?”

James ran his hands through his black hair.  It looked like he was on the verge of tearing great chunks of it from his scalp.  “My dad suggested I take the test so I had the proof.  She couldn’t do anything if I had the test to back me up.  I held on to that paper in case I needed it.  I . . . I wanted to be honest with you, but I didn’t want to risk losing you.  That’s why she brought me into it in the first place.  She wanted to mess us up.  I was scared.”

Too much.  This was all too much.  Maybe he was telling the truth.  Maybe he wasn’t.  How was I supposed to know?  “I guess you expect me to believe you,” I said quietly.

James dropped out of the chair and crawled across the worn beige carpet to sit beside me.  He started to reach out, but seemed to think better of it and pulled back again.  “I swear.  I’m telling you the truth.  There were so many times I wanted to tell you, but the more time passed, the harder it got to say anything.  How was I supposed to bring it up?  What could I have possibly said to make everything okay?”

I shook my head.  I felt dizzy, and my stomach was churning.  “You hid it from me.  For almost ten years!  Why should I believe anything you say?”

His eyes were shining, and I knew he was on the verge of tears.  I’d never seen such fierce desperation in him before.  “Sweetheart, you know me.”

“I thought I did,” I said bitterly.  I couldn’t help questioning everything.  What else could he be hiding?

“This happened years ago.  We’ve been through so much since then.  It shouldn’t . . . it shouldn’t matter anymore.”

I sighed as the ache in my chest threatened to choke me.  I wanted that to be true.  I really did, but secrets are subversive.  When they come out, they can crack the most solid of foundations.  I looked at my husband, who looked as agonized as I felt, and for one awful moment, I wished I’d never opened that drawer.