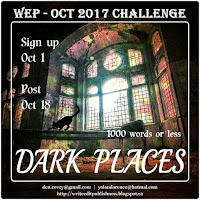 It's time for more fun with Write . . . Edit . . . Publish.  Thank you Yolanda Renee and Denise Covey for making this possible.

It's October, so that means we get to have a spooky time with this month's theme of Dark Places.

The light bulb burned out days ago, but Ray didn’t bother with it.  A trip to the store would’ve involved interacting with people in the street, and his insides twisted at the thought.  He couldn’t risk temptation so close to home.
You could go out at night.  The convenience store down the road is open 24/7, the little voice in his mind whispered.  You’d be less likely to be caught if you slipped up.
Ray shook his head so violently the muscles in his neck twinged.  He couldn’t obey the impulse.  Going out would only end badly.  He’d already added light bulbs to his online shopping list, and the delivery service would bring them by the following morning.  He could survive another 12 hours or so in the lightless room.
The faint illumination cast by his laptop screen was enough to navigate the tiny studio apartment.  He hopped from website to website, reading articles that barely interested him.  He needed to keep his mind busy.
You know where you want to go, the voice hissed.  There are so many websites that could bring you pleasure.  No one needs to know.  Why restrain yourself?  Looking at images online won’t hurt anyone, will it?
Ray tried to push those inklings deep inside.  Maybe he’d eventually be able to bury them so deep they’d no longer plague him.  It seemed an impossible dream most of the time, but he continued to hope in the face of futility.
A sharp knock on the door made him jump.  He set his laptop on his musty comforter and slid off his bed.  His heart thumped loudly enough in his ears to mask the sounds of his socked feet on the hardwood floor as he crossed the room.
The delivery wasn’t due yet, and family members stopped dropping by for visits two decades ago.  The neighbors tended to give him no more than a hurried glance before sidestepping him in the hallway.  His wild eyes and unkempt hair were more than enough to guarantee such a reaction.
Maybe you should try being more approachable.  Aren’t you lonely?  Don’t you want to get close to someone?
Ray shivered as he reached for the doorknob.  He should have pretended he wasn’t home.  That was the only option that made sense, but the logical part of his brain was drowning.  He’d soon lose touch with it altogether.  Nevertheless, he pulled the door open.
“Hello, sir,” a young girl with blond hair and brown eyes said cheeffully.  She was slender and came up to his shoulder.  She couldn’t be any older than thirteen or fourteen.  A cardboard box rested in the crook of her arm.  “I’m selling candy bars to raise money for new marching band uniforms.  Each candy bar only costs $1, and they’re really delicious.”
This last part of her spiel sounded so enthusiastic that Ray knew she must have sampled one for herself.  He pictured her holding an unwrapped bar in her hands, the chocolate melting over her fingers, gooey and sweet.
He licked his lips, and finding his voice, replied, “I shouldn’t.”
The girl’s smile widened.  “Who says you shouldn’t?  Come on, it won’t hurt you too much to give in this one time, and it’s for such a good cause.”
Yeah, you heard her.  Give into the temptation.  One more time.  Remember how it made you feel before?  Those were the only times you ever felt good.  Let her help you feel good.
Ray felt like he was quaking beneath the surface.  He could shatter at any moment, and he couldn’t imagine how he looked to this girl who had no idea the type of monster she was dealing with.
Invite her in.  See that perfect skin?  You know what you want to do to her.
He did know.  He couldn’t help imagining it.  Running his hands over that creamy flesh.  Replacing his hands with a razor blade.  Dragging that blade along the skin, pressing just hard enough to create a valley in which it could rest.  Then pressing the extra little bit that would breach the skin.  Crimson liquid bubbling forth around the metal before cascading toward the floor.  Watching it pool around his feet before using it to paint a picture on his floorboards.
You could paint flowers.  Or other pretty girls to stare at.  All you have to do is invite her inside.  Say you need to get your money.  She won’t suspect anything.
Except he was at home, and other people may have seen this girl going door to door.  If she disappeared, people would come looking for her.
“All right.  I’ll buy one.”  He bit down on his lower lip as he reached into his pocket and pulled out the dollar.
Her face lit up.  “Thank you, sir.  I appreciate your help.”
When he accepted the candy bar, he purposely brushed his hand against hers.  The contact lasted only a moment, but something deep inside him roared to life.
His toes bumped against the shoebox stashed beneath his bed.  He froze in place, savoring the memories of how each of the photographs contained within came to be.  The torn flesh.  Subdued cries for help that went unheard.
If only he had a light bulb.  He’d have pulled them out and perused them for an hour or two, reliving the moments since he could make no new ones.
Except he could, in a way.  He closed his eyes and envisioned new scenes of gore and torment.  He thought up new ways to make it beautiful.  The room might’ve been dark, but nothing rivaled the dark recesses of his own mind.