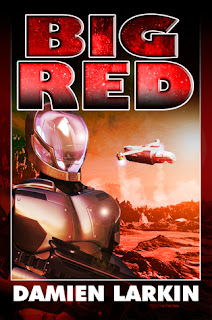 We have always been here...

Suffering the side effects of Compression travel, soldier Darren Loughlin wakes up screaming from a gunshot wound that isn’t there. Despite a fractured memory, he is forced to recount his year-long tour of duty on Mars to uncover the mysterious fate of Earth’s off-world colonies and the whereabouts of his shattered battalion.

With time running out, Darren recalls his tour of duty with the Mars Occupation Force in New Berlin colony, their brutal MARSCORP masters, and the vicious war against the hostile alien natives.

But as he exposes the truth, Darren suspects he is at the centre of a plot spanning forty years. He has one last mission to carry out. And his alien enemy may be more human than he is…

Damien Larkin is a full-time stay-at-home father of two loud (but happy) young children. When not tinkering with apps as a side project, you can find him reading everything and anything to do with psychology, history and science fiction. He enjoys turning terrifying nightmares into novels and currently resides in Dublin, Ireland.

Dancing Lemur Press offered me the opportunity to read and review this book before publication, and I happily accepted. I'm always eager to read a new science fiction book, after all.

Without further delay, here is my review!

Big Red can be described in a lot of ways. It’s military science fiction. It’s also an alternate history story. Most importantly, though, it’s the story of people who have been thrown into extraordinary circumstances that test the very limits of human endurance. I found myself rooting for these characters as they struggled for survival and understanding in a hostile environment.

The story opens with soldier Darren Loughlin as he regains consciousness. He is disoriented and trying figure out how he got there and what’s happening to him. The urgency mounts as those around him demand to know what happened to him and the people he was serving with. There is a very real sense that time is of the essence as he tries to pull together the fragments of his memory.

Throughout the novel, the reader journeys with the protagonist between past and present. We learn his history as he begins to recall it, seeing how he ended up on Mars against his will and all that he was expected to do while he was there. There were moments of humor and camaraderie that left me rooting for these characters. There were also moments of heartbreak and horror. As the story unfolds, we get clues that indicate all is not as it seems.

The technology was fascinating, and I thoroughly enjoyed how the time travel aspects of the story played out. This story is full of twists that kept me turning the page, and it all resulted in a satisfying conclusion. All in all, this is a great read for sci-fi fans!