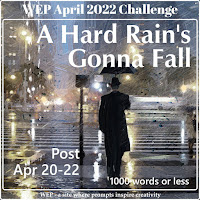 It's already time for another WEP Challenge in our Year of Music. This month's musical inspiration is "A Hard Rain's Gonna Fall" by Bob Dylan. For more information or to join in on the fun, check out this post. If you need additional inspiration for this prompt, be sure to check out the Challenges 2022 page.

Here's my take on this month's prompt. I hope you enjoy.

The sky looked identical to the wet concrete below. Water hemorrhaged from the sky, while the streetlights burned bright despite the mid-afternoon hour.

The weather report had warned a hard rain was going to fall, but no one in Rey’s little neighborhood had access to the most up-to-date reports anyway.

Rey pulled her frayed flannel shirt closer to her body as she huddled under an awning. It wouldn’t be so bad if it were a few degrees warmer, but the chill in the air sent the dampness radiating into her bones. Her teeth chattered, her limbs trembled. She closed her eyes and tried to envision bright skies and the gentle warmth of a summer breeze. The illusion was pleasant enough, but it couldn’t hold the cold at bay.

Ms. Dupree, hunched over her shopping cart with a tattered poncho pulled over her, trudged by. One of her tennis shoes had a hole so big her big toe poked through. Milo, who had to be nearly 80 years old, huddled across the alley, coughing into his white-knuckled fist. Up until recently, he’d still had his own home, but times got tough.

Nearly a dozen tents populated this little alleyway, shared amongst a current twenty-nine inhabitants. The number fluctuated from day to day. Some residents left one day never to return. Rey often wondered about them, especially little Ricky, who found his way to the alley at 15. His parents booted him from the house for being gay. She hoped that maybe his family had a change of heart, or maybe that he found a program willing to give him a leg up and out of this life. She hoped, but she knew the other dark possibilities that lurked on the edges of their daily lives.

The rumbling of her stomach interrupted her thoughts. She couldn’t recall the last time she’d been able to eat enough to feel full. At best, she could get her hands on enough food to take the edge off her hunger.

She dipped her hand into her damp jeans pocket and brushed her fingers against the change contained within. If she walked to the corner store, she might be able to buy herself a packet of peanut butter crackers. That had been one of her all-time favorite snacks as a child. Now those little crackers were tainted by the desperation of her situation.

The rain was falling too heavily to take the trip now. Hopefully it would abate soon.

Leaning back against the brick wall, she surrendered herself to thoughts that she generally tried to avoid. On days like this, it took too much energy to keep them buried.

The bright blue of Ethan’s eyes flashed before her eyes, and an aching pain flared in her chest. She’d only had him for a day in the hospital before the adoption papers were signed. Logic told her she couldn’t have been a good mother for him. She couldn’t even take care of herself most days. A pregnancy spent living on the streets had been risky enough. He deserved more than that. This knowledge didn’t stop the pain, though. He had to be two years old by now. Did he love peanut butter crackers? Was he allergic to anything? What made him smile?

These were answers she would never have.

She lingered awhile in the grief. It gnawed away at her insides, as persistent and potent as her hunger. She remembered the dreams she once had for herself. When she was young, she always imagined herself becoming a veterinarian. She could never stand to see an animal sick or suffering.

Now suffering was an integral part of her daily existence.

The rain persisted. Rey shoved herself away from the wall and began to walk. Why not? She was already half-soaked anyway, and she needed to eat something. Tears streaked her face, mixing in seamlessly with the pelting rain drops. It all ran like a waterfall down her cheeks. If she stayed in the driving rain long enough, perhaps it would wash her pain away.

Maybe the sun would eventually shine through and a rainbow would appear. Maybe, just maybe, there could be brighter days ahead.

And there it is! Please read the other wonderful entries for the April Challenge!