Now to continue with the seemingly strange questions.  Perhaps this one is not so strange as my first one, but as I always leave room for all conceivable options, the answers I come up with may be odd in nature.  Again, you're talking to an irreparable sci fi geek.  There is no fixing me to fit in with the so-called normal crowd, and take my word for it, I'm fine with that.


Question #2: If your character is faced with a situation where they have to fight, what weapon would they choose?  And this can include any real or fictional weapon such as light sabers, ray guns, or a bat'leth.  And when they fight, do they fight to kill, or merely to wound or frighten?

The type of weapon you choose for your character says a lot about their personality.  Some will fight with words first and foremost, only resorting to using a physical weapon when forced to do so.  This indicates that they value life enough to avoid hurting their adversaries.  The weapon chosen goes hand in hand with whether they want to kill, or if they find it more honorable and good to leave their enemy alive.

The bat'leth (sword of honor), the weapon of choice for Klingons in the Star Trek universe, is a very physical weapon.  It requires close proximity to your enemy, which is perfect for a warrior species that finds honor in battle and death.  It is shaped to effectively block another weapon and has various points with which to stab your foe.  The Klingons, who find honor in dying in battle, would kill therefore kill their enemies.  Any character who chooses a weapon like this would have to have a warrior mentality as well. 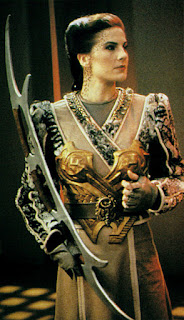 Combat with a light saber is also physical, but the configuration means you won't always have to get as close to stab an enemy as you would with other weapons.  It is also made of light, which shows that wisdom and order ultimately defeat the dark side.

Now, I'm describing weapons from sci fi, because A) I love it above all else, and B) it helps me to demonstrate my point in a more unique way.  Conventional, real life, weapons are of course acceptable, and the choice of any one of them is just as telling.

Although, apparently the bat'leth is now a real life weapon for some criminals.  And the Klingons would be disappointed, because there is no honor in this.


To take an example from something I've written, though the book needs editing that I plan to address once my new WIP is completed, I'll answer this question for Gretchen. Only a handful of people who know me will know who this is. Let's just say that she is an athletic person who is dedicated, in the beginning, to find a new challenge. She finds one when she begins to learn and perfect telepathy and telekinesis.  I would say this, her primary weapon, is most similar to the force in the Star Wars universe, so if she had to choose a fictional tool to fight, this would be it.  However, she would use hand to hand combat first.  She is a physical person who fights well, and she needs to keep her true power secret for personal reasons.  However, her goal is not to kill, but to subdue.  Killing only comes when absolutely necessary.