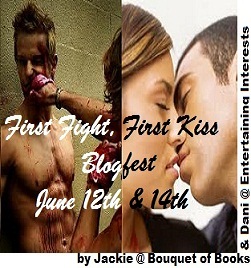 Though my schedule doesn't require me to post on Thursdays, this blogfest, like many good kisses, was too tempting to resist.  Thanks again to Jackie and Dani for hosting such a yummy blogfest!

I am taking the first kiss from the same WIP I used for the first fight entry on Tuesday.  I this section is a little long, but I really wanted to capture the moment.  At this point, Gretchen has learned of a prophecy concerning Quirin and herself, and this has been the secret that kept him from allowing their telepathic bond to go as deep as they've both wanted it to be.  Now that she knows, Gretchen has to decide how she wants to proceed, and this choice will forever alter the nature of their relationship.

Anyway, I hope you enjoyed it.  Feel free to be honest with your comments.  There are some scenes you want to capture perfectly.  This is one of them.