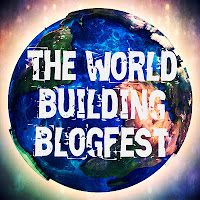 It's Day #4 of The World Building Blogfest.  Sharon Bayliss is hosting this week-long event, and you can check out the details HERE.

The topic for today is culture.  Food, celebrations, and a wide array of other things fall under the category of culture, so this is a rich topic to tackle.  For my post, I decided to talk about the Kentari equivalent of a wedding ceremony.  We don't really see this until the third book in my series, but since it's part of the same world, I think it's okay to share it.

The Kentari word for marriage translates to "partnership" and the ceremony is a kinship ceremony.  Partners stand on equal ground and both have unique qualities to bring to their pairing, so there is no title distinction like "husband" or "wife."

The actual kinship ceremony is private.  No one is present but the two people making the commitment to one another.  They first design a kinship symbol. This is symbolic of the creation of a new family.  The symbol can represent anything they want.  Then, using the same power the Kentari use to heal, they take turns tracing the design onto the back of their new partner's hand.  The power coursing through the fingertip causes the skin to release additional pigmentation, allowing the new tattoo to stand out dark against the lighter surrounding skin.  The tattoo will grow lighter over time, so the partners will have periodic renewal ceremonies, during which time they make the commitment all over again.  The tattoo goes on the dominant hand, so whenever they extend their hand to someone else in friendship or in any kind of business agreement, they are also announcing their commitment to the world.  The Kentari are a private people, but it is of paramount importance that one does not try to hide their love for their family.

The partners will also select a new family name.  Selecting this name officially moves them both into a new stage of life that is deemed worthy of a new designation.  Their former last name remains as a middle name, and this is considered a tribute to their roots.
Posted by L.G. Keltner at 12:38 AM