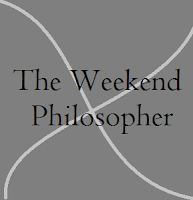 I wanted to start out my tenure as The Weekend Philosopher by addressing the issue of personal identity.  Descartes penned the famous words "I think, therefore I am."  We know we exist because we are thinking beings.  And our thoughts, our memories, are a large part of who we are.  Even when we stand at a crossroads in life, confused about which path to take, we still feel confident about our identity.  We know our name, we know about our past, we know what our dreams were as children (even when real life forces us to change gears). When someone asks us who we are, we can typically provide them with an answer deemed satisfactory by both parties.

However, life can become complicated.  And in the realm of science fiction, life altering complications are the norm.  I recently re-watched the Star Trek TNG episode "Second Chances" (Season 6, Episode 24).  In this episode, a visit to a science outpost reveals that there are two William T. Rikers.  When Riker served aboard the Potempkin eight years earlier, a transporter accident resulted in the materialization of two Rikers: one aboard the Potempkin, and one on the science station.  After living alone on the science station for eight years, Lieutenant Riker is shocked to learn of the existence of Commander Riker. 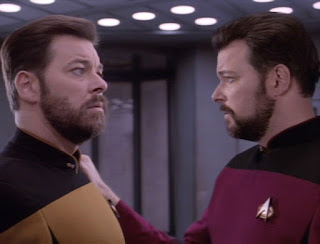 Is one of them the real Riker?  After all, we each have an idea of our own unique identity.  Would the presence of a copy threaten that unique identity?  (In thinking about this question, I wrote a poem.)  Let's run with our intuition for a minute in thinking about this question.  Say you were to walk into a scientist's lab and scanned.  Before your eyes, a perfect duplicate materializes, complete with a record of your memories.  You'd intuitively say "I'm the real me.  They're the copy."  Yet, possessing your memories up to the point of being scanned, your duplicate would likely make an impassioned case that they're the real you. Why wouldn't they?  They possess everything you do that makes you who you are.  You are both thinking beings, and you think you possess the same identity. How can that be?

In the case of this episode, Riker didn't even see a duplicate materialized.  His body was disassembled, and the information ended up manufacturing two Rikers.  Both of them came into existence at the same time with the same DNA and the same memories.  In a very real sense, there's no way to point to one of the Rikers and say "This is the real one."  At the moment they both materialized, they both had an equal right to declare the same identity. It is my assertion that for that one moment, the Rikers were very much the same person, though they inhabited different bodies.  After that moment of genesis, however, their lives proceeded down very different paths, producing distinct memories and attitudes.  Each passing day differentiated them from one another a little more. The identities they possessed became more recognizably their own.  When we see the two of them together on the Enterprise eight years later, they are certainly similar in more ways that not, and a casual observer might say they are the same person, though that is no longer the case.

If you think this scenario seems disconcerting, you're not alone.  Lieutenant Riker and Commander Riker clearly rubbed each other the wrong way.  They saw in one another what might have happened, what may have been.  They also likely felt intruded upon.  Lieutenant Riker expresses interest in rekindling his romance with Deanna Troi, which Commander Riker had left behind in the pursuit of his career.  So long as the two of them remained on the same ship, it seemed inevitable they would tread on each others toes.  It seems clear there's only enough room in our lives for one of us.

In the end, Lieutenant Riker leaves the ship to restart his career.  There was little doubt this would happen.  He has to make a new life for himself, and he could never do that on the Enterprise.  Commander Riker is our Riker.  He's the one who serves as Picard's right hand man.  He's the one we've watched play poker and trombone.  While it was fun to see the other Riker for a time, one feels more authentic than the other.  We may know intellectually that this is ridiculous, but that doesn't change the gut feeling we have.  Had we begun the series following Lieutenant Riker on the science station, our feelings would be different.

Perhaps this is why, before he goes, Lieutenant Riker decides to go by his middle name: Thomas.  He understandably wants to claim a life for himself, though to be fair, he could have just as easily said Commander Riker should change his name. Except one of them has been alone for eight years, and when he did set foot on a starship again, he clearly stood in the shadow of our Riker.  He changes because he's put in a position where he feels like an imposter, regardless of how strongly he feels about who he is.  One Riker has an entire ship of colleagues who can attest to who he is and can say that he's the Riker they know.  The other doesn't have that.  He needs to seek that out.  Deciding to claim the name Thomas is, in my opinion, an attempt on his part to embrace his own path and make a place for himself.

I know I've covered a lot here, but I'm encouraged by the questions I've raised.


In future posts, I hope to examine these questions in more depth.  Feel free to leave your thoughts in the comments section.  I may take them into consideration when writing future posts.
Posted by L.G. Keltner at 11:08 PM