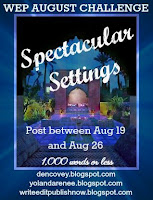 Here's my entry in the August 2015 WEP Flash Fiction Challenge.  It's all about Spectacular Settings!

For the first part of this challenge, I'd like to share an excerpt from Neil Gaiman's novel Neverwhere.

"It was a city in which the very old and the awkwardly new jostled each other, not uncomfortably, but without respect; a city of shops and offices and restaurants and homes, of parks and churches, of ignored monuments and remarkably unpalatial palaces; a city of hundreds of districts with strange names-Crouch End, Chalk Farm, Earl's Court, Marble Arch-and oddly distinct identities; a noisy, dirty, cheerful, troubled city, which fed on tourists, needed them as it despised them, in which the average speed of transportation through the city had not increased in three hundred years, following five hundred years of fitful road-widening and unskillful compromises between the needs of traffic, whether horse-drawn, or, more recently, motorized, and the needs of pedestrians; a city inhabited by and teeming with people of every color and manner and kind."

I love this use of setting because it sets the tone for the whole novel.  Neverwhere is a story of finding the strange and fantastical hidden in plain sight.  London Below is a wonderful and dangerous place that most people never see, but there are entrances everywhere.  The juxtaposition of old and new as outlined in the excerpt gives the impression of a city that's been layered over time, and highlighting that nature makes the idea of something as bizarre as London Below remaining hidden that much more plausible.

Now on to part two!  This comes from my WIP, which is currently untitled but is the follow-up to my novella A Silent Soliloquy.

The sky is black.  The moon and stars have been obliterated by cloud cover.  I pull the dark trench coat tight around me to combat the bone-chilling breeze.  This coat used to be as black as the night sky, I suspect, but old age and use has turned it an unappealing brownish hue.  The large cloth that I’ve wrapped around my head to hide my hair is royal purple, and I’ve made sure that it doesn’t cover my ears so I can hear anything that might be happening around me.  Fortunately, the city is largely silent as I make my way down the street, keeping my eyes peeled for the potholes that might trip me up.
There are still some signs of human activity, of course.  There’s a partial cigarette on the ground by a trash bin, the cherry still glowing softly.  The sound of a metal door sliding shut in the distance lifts the silence briefly before it comes crashing down around me once more.  Curfew just ended a few minutes ago, allowing the early shifters to go about their work routine, but most of the world is still asleep.
My shoulders remain hunched as I kick aside a couple of food wrappers.  A red neon sign advertising discount pharmaceuticals illuminates the end of one street, so I get a glimpse of a human figure curled against the wall.  It’s wrapped in a filthy pink blanket.  Whoever it is has clearly been here for some time, but I’m not surprised the curfew violation went unnoticed.  Enforcement officials have more important places to protect.
As the long minutes pass, which are filled with the sight of tiny square homes standing entirely too close together, a faint pink glow grows on the horizon.  The cloud cover is beginning to lift enough that I can make out the top of the sun as it peeks over the edge of the world.  I’m just coming to the Ryan Street Bridge.  There’s a bit more traffic now, of both the foot and motor vehicle variety, so I keep my eyes aimed downward as I walk.  Near the start of the bridge, I casually begin to shrug out of the trench coat.  The shedding reveals the wide-collared cerulean sweater that was somewhat fashionable a couple years ago and generic black slacks.  It’s still quite cold, but the sweater is heavy enough that hardly anyone would think anything of my appearance.  I let the coat drop so that it comes to rest on the grassy slope that leads to the water.  Lots of homeless people take shelter beneath this part of the bridge, and it’ll be claimed before long.
The dull roar of the river passing beneath my feet draws my attention as I cross.  The hypnotic quality of the sound keeps my thoughts grounded, as does the steady whir of passing cars.  The less I think, the better.
Soon I’ve left the bridge behind me.  A group of people dressed in jumpsuits stand in front of a convenience store sipping coffee and talking.  A happy laugh escapes one of them, while the guy next to him looks mildly annoyed.
About fifteen minutes later the local elementary school comes into view.  I hold my shoulders straight and my head high.  The surveillance cameras are more numerous in this area, but I happen to be casually looking in the opposite direction at a passing car, or an advertisement board, or a rock garden each time I pass one.  A stand of trees near a side entrance to the school gives me just enough shelter.  I pull the purple garment from my head and flip it, revealing the dark blue floral print on the other side.  When I step onto the sidewalk once more, I’m wearing it as a shawl.  My hair is pinned up in a French twist.  I could pass for any teacher or business woman now.
The sun is well above the horizon when I pass a bistro.  I remember it from a mission that happened early on in my life, and I shudder slightly.  I suppress my visceral reaction as I pass a group of men and women in fancy business suits walking out with breakfast croissants and baguettes.
It’s all about walking tall and proud, as if I make this walk on a daily basis.  I continue to glance away from every surveillance camera that I pass.
I may seem composed on the outside, but the bistro has stirred my thoughts in an unwelcome way.  I can’t avoid the thought that Will and the others have to be awake by now.  I can picture Will ranting about how he should have trusted his gut in the first place and kept me locked away.  He must be telling Blue that he feels like an idiot for lowering his guard, and that saving his life must have been a clever ploy to gain his trust so that I’d have a chance to escape.  For all I know, he’ll have evacuated everyone by now, and that I’ll never be able to find them again.
Maybe this was a bad idea.  Maybe I’ll come to regret it.
That fear nibbles at me until I take the final turn into a residential district.  Here the houses are tall and brightly colored.  Ample lawns are framed by white fences, and shiny cars sit in driveways lined with garden gnomes and tiny windmills.  The house I’m here for is a soft sky blue.  A large slab of black granite sits in one corner of the yard, the name of the family that lives here proudly inscribed.
Wilson.
Rage bubbles inside me as I stand there in the light of an increasingly sunny morning.  So much pain started here.  Lives changed forever, including mine.
I think of the boy who once called this place home, and the other boy who tormented himself in the years that followed, as I stride toward the house.