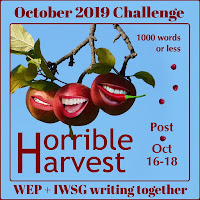 It's time for another WEP/IWSG Challenge! This is an exciting month as we have some great prizes! If you haven't joined us yet, you should seriously consider it! You have until October 18th to get in on the fun!

And now, here's my entry. The theme for this month is Horrible Harvest.

Life in the Aftermath

The rustle of brown corn leaves filled the air as a light breeze stirred. Reya stared into the distance to the clouds darkening the horizon. The wooden slats of the front porch groaned beneath her feet as she paced its length. An electric tingle permeated the atmosphere, and it sent a chill down her spine.


Harvest season lurked just around the corner, and the weight of it threatened to crush her. So many seasons came and went before this one, and they all went relatively smoothly. Tons of hours spent in the field with Claude, always at the mercy of the weather. The weather both determined the size of the harvest and the speed with which the work was done. Torrential rains created delays at times, and once, a freak early snow storm caused a mountain of stress.
What she wouldn’t give to tackle those issues all over again with Claude by her side.
She wiped her eyes. Weeping wouldn’t help her do what needed to be done.
Reya stepped off the porch, a wicker basket in hand. If this storm was coming, she needed to work quickly. Rounding the house, she approached the large garden that she and her husband first started more than two decades ago. They were young and optimistic then, imagining they would soon fill their home with the laughter of children. That dream wasn’t meant to be, but they still created a lot of great memories here, many of them in this very garden. How many vegetables had grown here over the years? How many had she canned and stored away to get through the winter? If only she had some of them left, but a couple years of drought severely diminished her stash.
She paused to scan the yard before proceeding. Her free hand moved to feel the reassuring shape of the handgun hidden beneath her flowing shirt. Fortunately, she saw nothing to alarm her.
Reya proceeded to the tomato plants first. Her bones ached as she leaned down to examine a tomato. It was small and green, but she plucked it from the vine anyway and stuffed it into her little basket. Claude always liked green tomatoes. They were good for frying.
A painful twinge in her chest stopped her in her tracks. So many things remind her of Claude. She should’ve been accustomed to the empty feeling by now.
Losing Claude would’ve been a big enough shock on its own, but the circumstances of his death were nothing short of Earth-shattering. Coordinated terrorist attacks across the county devastated multiple cities. Poor Claude had long been a country boy, but he chose the wrong day to go into the city. It was meant to be a brief trip to visit a friend. He never returned. Dozens of other people never made it home. The suicide bomber on the subway made certain of that.
Tensions escalated, and the first nuclear bomb was launched. More were to follow, and millions more perished in the immediate aftermath. It all escalated so quickly. Reya never imagined she would have to take a life, and the first time haunted her for days afterwards, but she did what she needed to do to protect herself. What else could she have done? The people who came wanted to take what little she had.
She shook her head, hoping to banish her dark thoughts, and moved on to the next tomato vine. This one had two tomatoes, but neither of them was larger than a golf ball. Within a few minutes, she had the basket filled a quarter of the way with tomatoes. She moved on to the onions, then the potatoes. Pickings were slimmer than she would have liked, but she gladly took everything she could find.
A sudden movement off to her left sent Reya’s heart pounding. The basket hit the ground as her hand flew to the gun. Before she could draw it, however, she caught sight of the culprit. A small ground squirrel. It stood still, its dark eyes fixed on her. She let out her breath in a sigh of relief. “You’d better take cover,” she said aloud. “It might storm soon.” She turned to look at the horizon again. The threatening clouds were indeed closer than before.
When she turned back, the ground squirrel was gone. She’d need to be gone soon, too.
Once she’d thoroughly combed through the garden, she dusted off her knees and carried her bounty back to the house. The scarcity of water meant she couldn’t waste it on cleaning her vegetables, so a scrubbing with her hands would have to suffice.
She settled on a rocking chair on her porch to watch the weather roll in. And roll in it did.
The distinctive pitter-patter of water droplets sounded on the porch roof came first Reya stepped forward and gazed at the withered chrysanthemums that bordered the house. They should have been flowering in brilliant oranges and reds, but a rough season left them brown and nearly dead. The rain hitting them now surely wouldn’t be enough to resurrect them.
A lump caught in her throat when she saw one of the rain drops clinging to a spindly branch. It was black. Tarnished with fallout. There was nothing nourishing about this rain.
She trudged back into the darkened house. She tried not to think about the leaks that would lead to pooling in the attic. She couldn’t fix it. Just like there was no way she could complete the harvest on her own. And even if she could . . .
Damned if you do, damned if you don’t. Claude was the lucky one. This thought came daily now. Late at night, she found herself wishing she’d traveled with him that day. Then none of this would matter. Not for her.
Early on, she lamented her lack of a radiation meter to keep track of things, but now she was glad of its absence. What good would it do to know the truth?