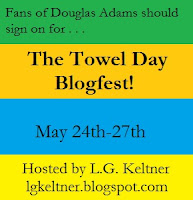 Today is Towel Day, a day to honor the memory of the amazing Douglas Adams.  I decided to host this blogfest, because I've loved the work of Douglas Adams for most of my life.

(A quick note.  The linky list will remain open through the end of the blogfest, so feel free to jump in!  Click HERE to find all pertinent details.)

I've read all of the Hitchhiker's Guide to the Galaxy books.  I've heard the radio programs.  I also own the book below, which is a great peek into the life of Douglas Adams.  If you're a fan and you haven't read this, I highly recommend it! I also find it notable to mention that page 42 of this book is left blank.  This was an appropriate choice. 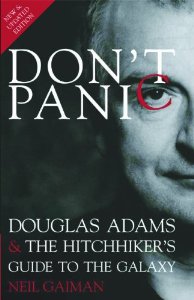 I wasn't sure what I wanted to share at first, which is funny since I'm the one hosting this blogfest.  I decided to share a few Douglas Adams quotes that speak to me, and I figured I would wrap things up with a little flash fiction tribute.

"I love deadlines.  I like the whooshing sound they make as they fly by."

"A common mistake that people make when trying to design something completely foolproof is to underestimate the ingenuity of complete fools."

"Flying is learning to throw yourself at the ground and miss."

"For a moment, nothing happened.  Then, after a second or so, nothing continued to happen."

"The Guide is definitive.  Reality is frequently inaccurate."

"The mere thought hadn't even begun to speculate about the merest possibility of crossing my mind."

"Human beings, who are almost unique in having the ability to learn from the experience of others, are also remarkable for their apparent disinclination to do so."

I could cite so many more amazing quotes, but I'll have to leave it at that for now.


The Tale of the Lost Towel

Zerndoggle Ramfort Smith III woke early on the morning of his 42nd birthday with a sinking feeling in his kneecaps.  Most people got sinking feelings in their stomachs, except for the Fetts of sector ZZ5 Plural A Beta who had no stomachs at all, but Zerndoggle could never get the hang of normalcy.

Why did he have this highly irregular sensation?  He’d committed a grievous error, one far too ghastly for even the Monks of Eternal Repentance to understand.

Zerndoggle forgot where his towel was.

Unfortunately, the mystery of the missing towel went far deeper than a simple SMEF problem.

The towel, still damp from Zerndoggle’s last bath, was inadvertently left next to a ballpoint pen.  When the wormhole inevitably opened to take the ballpoint pen to its home planet, the towel was pulled through along with it.

The damp towel landed on the back of a giant mutant star goat that happened to be floating past the ball point pen planet.  Mold soon began to grow on the towel, and soon it was home to an entire mold colony.  Over the millennia, the mold evolved until super-intelligent mold spores began to launch from the towel.  The spores encountered many species, and they settled in the brain tissue of the travelers they encountered.  These travelers didn’t suffer from any outward signs of illness due to this mold infestation, save for one terrifying symptom.  The infested all developed a sincere love for Vogon poetry.

As for Zerndoggle . . . his fate was too terrible to mention here.  What else could you expect?  You always need to know where your towel is.