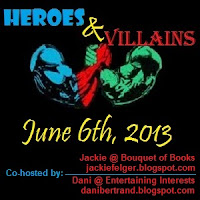 It's time for the Heroes & Villains Blogfest!  Jackie @ Bouquet of Books and Dani @ Entertaining Interests are hosting this fun event.  Pop on over to either of their blogs to learn more.

Favorite Heroes:
Captain Malcolm Reynolds (Firefly)-Though he's rough on the surface, he has no problem with breaking the law, and he's less than tactful in many situations, he does live by a code of ethics.  When push comes to shove, he tries to do right by the people under his command, and he fights for the things he believes in.
Captain James Tiberius Kirk (Star Trek)-Kirk is a bit of a womanizer, and he doesn't think much of the rules, but he knows how to think quick on his feet to save the day.
Captain John Sheridan (Babylon 5)-Anyone who can end the Shadow War and take back Earth from a fascist regime is definitely hero worthy.  Plus he can make a great speech!

Wow.  I have a thing with captains, don't I?

Favorite Villains:
The Borg (Star Trek TNG and Voyager)-The Borg are persistent, adaptable, and quite creepy as far as adversaries go.  You definitely don't want to see them on your viewscreen.
Mr. Morden (Babylon 5)-He's a traitorous weasel, but he has a smile and a way about him that makes you love to hate him.
Dolores Umbridge (Harry Potter)-In many ways, she was more hateful than Voldemort.  I can't even begin to say how much I wanted to see something awful happen to her.

Who are some of your favorite heroes and villains?

Email ThisBlogThis!Share to TwitterShare to FacebookShare to Pinterest
Labels: Heroes and Villains Blogfest