It's time for another WEP Challenge. This month's theme is Urban Nightmare. It seems oddly fitting now. Be sure to stop by the sign up post if you want to join in!

Poetry isn't my strongest suit, but it felt like the best avenue for self-expression at the moment. 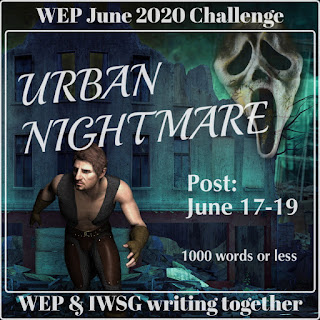 The forecasts of the world’s end
came time and time again.
The end is nigh came the cry,
“You must repent, amen.”
Those dates foretold came and went
and life continued on.
New voices rose as others faded
but people wished them gone.

Then science chimed in with its warning,
but cries fell on deafened ears.
“We don’t trust you!” many yelled.
“You’re only stoking fears.”
The warming planet, depleted resources.
Those in power waved them off.
Changing things would take effort.
So much easier to scoff.

Then the viral threat reared its head,
but it started so far away.
“It isn’t here, no need to worry.
It’s easily kept at bay.”
The spread came anyway, as history
has shown it surely could.
The illness spread like wildfire
before people finally understood.

Soon the streets were empty.
The world fell quiet and still.
Life ground to a halt,
by an act of collective will.
The urban nightmare set in,
as the emptied streets mirrored death.
The end of our lives as we knew them.
We all paused and took a breath.

As it turns out, pausing and waiting
was not as simple as it sounded.
People grew restless and bitter
and the problems compounded.
The allure of life as normal
was too precious to resist.
“The world must open once again.
Life must go on. We insist!”

And as life started to resume
old problems bubbled up.
Lives taken unjustly with no consequence.
More people did rise up.
“We want to change this now!
Listen to our pleas!”
They filled the streets and shouted
While others got down on their knees.

Most took to the streets in peace,
and still some violence reigned.
The message filtered through the chaos,
while many relationships were strained.
Disagreements did abound as talks ensued
about how to fix what was broken.
Ideas did flow through,
but many resentments were spoken.

The world’s ills weren’t visible to all
while others accepted them as fact.
“You can’t fix all of society,” they said
in the hopes of keeping it intact.
Change is painful for all,
but some have more to lose.
Livelihoods upended and lives lost.
Society needs to choose.

Illness rampant and unrest in the streets.
It all seemed too grave to bear.
How can it all be made right at last?
How will we wake from this nightmare?
As buildings burn and tempers flare,
we all forget to listen.
As lives are lost and futures changed
and the mounting tears glisten.

Sickness threatens with a new wave,
while our societal sickness festers.
While it may feel hopeless at times
we must stand up to the jesters.
Scary as the future is
we must work to make it bright.
Life and society will never improve if
good people don’t join in the fight.